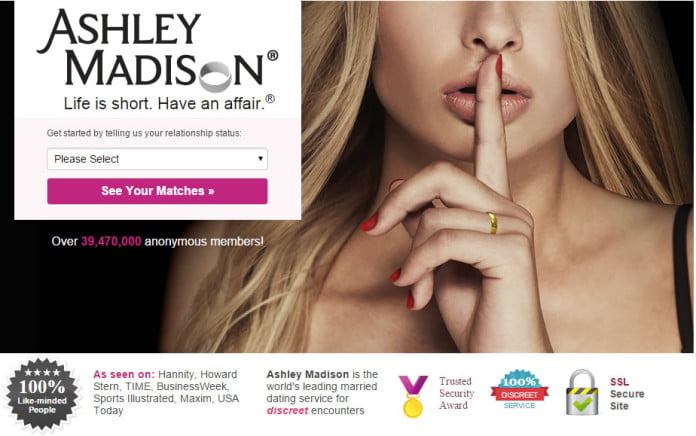 Ashley Madison,the adultery website or we can say official sponsor of discrete extramarital affairs,the website’s slogan reads: “Life is short. Have an affair.“, was going through a tough time.Hackers have stolen about 36 million emails during the Ashley Madison hack.The hack was first disclosed in July 2015; in mid August, data from millions of users began to appear online.The information was first posted on the dark web, before the group behind the attacks — calling itself the Impact Team.

Now Ashley Madison’s parent company Avid Life Media is offering a $500,000 Canadian(US$379,000) reward for information leading to the arrest of the hacker or hackers behind the breach of its network.The announcement was made by Bryce Evans, acting staff superintendent of the Toronto police.
This is not the fun and games that have been portrayed a lot in different media outlets, live radio stations,This ain’t fun and games anymore.Today I can confirm that Avid Life Media is offering a $500,000 reward to anyone providing information that leads to the identification, arrest and prosecution of the person or persons responsible for the leak of the Ashley Madison database,………..Evans said.

Users are really screwed because hackers constructed a searchable database using the information, allowing interested parties to search for people by name or email address, and returning details including their sexual preference, contact details, body type, and fetishes.User passwords are encrypted with the bcrypt algorithm.Using a form site from cynic.al or Trustify, users can confirm whether specific emails are included in the database.

The consequences for Ashley Madison are likely to be catastrophic.First of all,hack destroyed many people’s married life.There were a number of suicides reported after the website breach.Some of them are also facing professional consequences.The data dump contained email addresses of U.S. government officials, UK civil servants, and workers at European and North American corporations, taking already deep-seated fears about Internet security and data protection to a new level.The group behind the breach said their goal was to destroy Ashley Madison’s parent company, Avid Life Media, and they may well succeed. The company is in for an array of damaging and expensive lawsuits, quite possibly enough to drive it into bankruptcy outright.The legal consequences are likely to extend beyond lawsuits. As the Washington Post noted, adultery is a crime in the military, and thousands of Ashley Madison users had email addresses from the .mil domain. It’s impossible to say how many of the addresses are valid — Ashley Madison did not require users to verify their email addresses. But under military rules, service members found guilty of philandering can be punished by a year of confinement. They’re also subject to a dishonorable discharge, which would mean losing their pension.
And the worst thing is,online criminals are using the Ashley Madison leak for blackmail. KrebsonSecurity is reported one such incident,Rick Romero, the information technology manager at VF IT Services, an email provider based in Milwaukee. Romero said he’s been building spam filters to block outgoing extortion attempts against others from rogue users of his email service. Here’s one that he blocked this morning (I added a link to the bitcoin address in the message, which shows nobody has paid into this particular wallet yet):

Unfortunately, your data was leaked in the recent hacking of Ashley Madison and I now have your information.

If you would like to prevent me from finding and sharing this information with your significant other send exactly 1.0000001 Bitcoins (approx. value $225 USD) to the following address:

Sending the wrong amount means I won’t know it’s you who paid.

You have 7 days from receipt of this email to send the BTC [bitcoins]. If you need help locating a place to purchase BTC, you can start here…..

One user, Mac, told Krebs that the extortion would be very disruptive but he isn’t worried. “So they have my home billing address and first and last name, so it would be relatively easy for them to get my home records and figure out who I am,” he said. “I’ll accept the consequences if this does get disclosed, but obviously I’d rather not have that happen because my wife and I are both very happy in our marriage.”

Anyway with this breach once again online criminals shown us how our datas are safe in online.May Ashley Madison can recover this stage but they it will be difficult to acquire people’s trust agin.