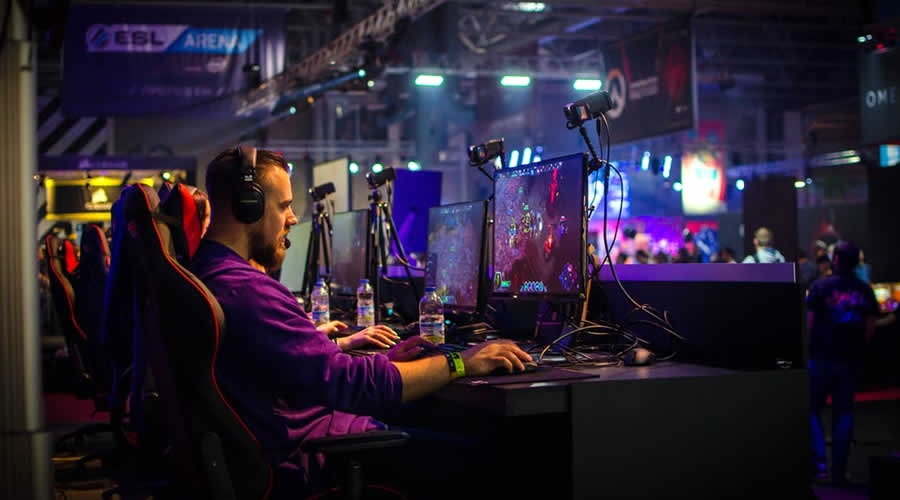 16-year-old Pennsylvania teenager Kyle “Bugha” Giersdorf scooped $3 million in July 2019 when he took the top prize at the Fortnite World Cup. Giersdorf is not the first teenager to have been catapulted into enormous wealth from playing video games, nor will he be the last.

Competitive esports style gaming is an industry awash with investors and financial backers, making it worth an estimated $1.1 billion by the end of 2019. The meteoric rise of esports has taken even the savviest of gamers by surprise, but what lies behind its success and what games are powering the esports revolution?

Prior to the inception of the internet poker was a run-of-the-mill casino game that whilst popular, was still somewhat niche. The game exploded in popularity when it was first made available on the internet, prompting thousands of people to Google, ‘How to play poker’.

The online providers made their money through subscription fees and small percentages of the table win. But in essence online poker was nothing more than an outright battle between the virtual players.

Conservative estimates in the USA suggest that there are 60 million registered online poker players, making the game more popular than golf.

What made online poker so popular was the competitive nature of the game combined with the alluring offers of huge financial figures for poker tournament winners. The exact same factors that have made competitive gaming so incredibly popular.

Kyle Giersdorf may have taken the headlines with his $3 million prize pot win at the Fortnite World Cup, but he wasn’t the only player taking home a huge slice of cash. $97 million was shared between hundreds of other players making the total prize pool the largest ever awarded at an esports event.

Most esports tournaments have made money through selling franchises and entrance into their tournaments, but Fortnite developer’s Epic Games chose another strategy for this tournament.

Participation for the Fortnite World Cup was based entirely on merit, with the tournament’s participating players qualifying through a series of grueling qualifiers in 2018.

That decision helped to foster a culture of equality that has ultimately resulted in the game’s popularity continuing to grow.

Epic Games changed the world when they released Fortnite: Battle Royale in 2017 as a free-to-download game. The zombie apocalypse cartoon-style game was an instant hit with fans across the world.

It combined the gameplay of classics such as Call of Duty with fun graphics and gameplay all for the price of absolutely nothing. Such is the popularity of the game that in March 2019 it recorded player totals of over 250 million.

The average Fornite player spends at least 6 hours a week playing, making it not only popular but somewhat addictive. The overnight success of Fortnite, as well as its basic competitive gameplay, made it a natural choice for an esports tournament.

The annual esports tournament held to determine the world champions of Call of Duty will have a $6 million top prize when it next takes place. 16 teams made up of 5 players each will battle it out to take the top prize and the pride of being the world’s best.

The World League first took place on December 2015 and has since gone on to become a huge success with players all around the world. The main tournament remains the biggest draw for fans, but organizers have recently incorporated an amateur league to boost participation levels and exposure.

Hardpoint, Search and Destroy and Control is the Call of Duty game modes that teams will have to play to win the World League crown. In the case of Control, the game mode has been specially designed to encourage fast-flowing tactical gameplay.

Why Call of Duty?

Fortnite is very much Call of Duty for the masses, a simplified and ‘dumbed down’ version of the classic shoot ‘em up gaming series. For much of the past decade, COD has dominated the sales charts, with well over 300 million copies being sold across the globe.

For discerning competitive players, it really is the pinnacle of a first-person shooter without being too exclusive like rival title Battlefield.

EA Sports developed game FIFA has been a fan favorite for the past 15 years after finally shrugging off the channel of rival game Pro Evolution Soccer. In the past 5 years, the sales figures for FIFA’s various games have gone through the roof.

Esports FIFA competitions are not as simple as other game tournaments, there isn’t one stand-out tournament that takes precedence over all others. Instead, there are various different iterations with the eClub World Cup and the eNations World Cup being two of the most popular.

In addition to those tournaments, there are domestic competitions that mimic the layout of traditional European leagues such as the Premier League and Serie A esports competitions.

Obviously, FIFA isn’t the world’s only actual sports game performing well in the esports landscape. American football, basketball, and baseball are all popular games that attract hundreds of thousands of players.

However, FIFA has the edge on its competitors purely because of the worldwide love of football as a sport. 3.262 billion people watched the FIFA World Cup in Russia in 2018, making it by far the most-watched sporting event in history.

More and more people are interacting with football in non-traditional ways such as playing FIFA and other football games.

What’s next for esports?

Continued growth. The industry shows no signs of slowing down as more and more gaming titles release esports tournaments. Call of Duty is rumored to be releasing a free-to-download battle royale game in the coming months.

If that can gain half as much popularity as Fortnite expect a new esports tournament with staggering amounts of prize money in the near future.

Ex-manager: Facebook has made to be addictive as cigarettes on purpose

How to install Google Chrome extensions on Android browser