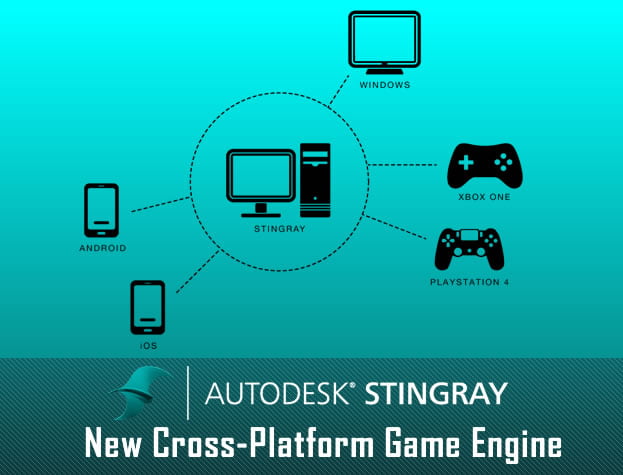 Autodesk,the makers of popular 3D Modelling products are now focusing to conquer gaming sector.Audodesk already has a great foothold in the gaming industry with many of its tools like Maya and 3ds Max modelling software, the Scaleform rendering engine, and a variety of animation and texture-making tools.But the meat suite of game are usually developed with help of other game engines-Unreal Engine 4 or Unity or CryEngine.

Stingray is developed on the powerful, data-driven architecture of the Bitsquid engine, which Autodesk acquired in 2014.Stingray will be a comprehensive new platform for making 3D games. The engine supports a host of industry-standard game development workflows and includes powerful connectivity to Autodesk 3D animation software that simplifies game development across a wide range of platforms.Autodesk assures that Stingray will makes it easy and intuitive for artists with varying skill sets and programming expertise to create the next generation of 3D blockbuster games, entertainment and even architecture.

Stingray is cross-platform,it supports testing and deployment to Android, iOS, Windows 7 and 8, Oculus Rift DevKit 2, PS4, and Xbox One.With other tools of Autodesk-Maya, Maya LT, and 3ds Max can all be used alongside Stingray to create an end-to-end development environment where changes in one application are reflected in another, similar to Adobe’s Dynamic Link technology. The live-update capability isn’t restricted just to the IDE, but can even occur during debugging with connected devices.Several other well known tools also come with Stingray, including: Beast, HumanIK, Navigation, Scaleform Studio, Wwise, and NVidia PhysX.

Between Augmented Reality, Virtual Reality and the proliferation of mobile platforms, the games industry is undergoing a major transition, which poses new complexities for both AAA and indie game developers. Autodesk developed Stingray with these challenges in mind, and we’re excited to share its debut with the game developer community……..said by Autodesk senior vice president, Media & Entertainment, Chris Bradshaw.

One of the most obvious differences between Stingray and its competition is that the general public can’t get it for free.Autodesk Stingray will be available via Autodesk Subscription starting August 19, 2015 for $30 per month. Later this summer, Autodesk plans to offer Maya LT Desktop Subscription customers access to the engine as part of Maya LT.So we have to wait to see how Stingray will satisfy its customers.
Check the Official Stingray Website for more information.
Here is an introduction video: