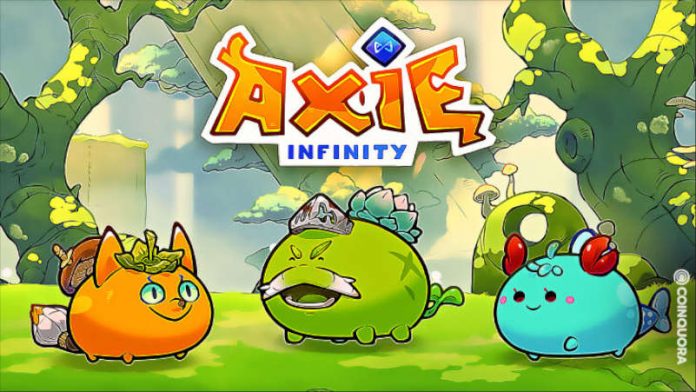 Axie Infinity is a mobile game in which you collect and battle adorable pixelated beasts. It’s the brainchild of former gaming executive Matt Hall and his team at Axie Infinity Inc., a small startup that hopes to make blockchain games popular among gamers.

What is a Blockchain?

Before diving into the game, let’s first review what blockchain is. Blockchain is a decentralized database that stores information about transactions (such as buying or selling) in an encrypted fashion. It also allows you to make transactions much more quickly than traditional databases.

In the case of Axie Infinity, all transactions are logged on Ethereum, a blockchain-based computing platform. This means that you can own your creatures and items, instead of having them belong to someone else or living in the gray area of being illegal third-party hacks. If EA decides to shut down servers for their latest game, your creatures might cease to exist altogether—but not so with Axie Infinity! Because everything is on the blockchain, it makes digital items truly yours.

Axie Infinity is a pet-themed card game that was created by Axie Infinity, an independent studio in Singapore, and published by Decentraland. The game is played on the Ethereum blockchain network, which allows transactions to be verified by a distributed network of computers rather than a central authority like Visa or PayPal. It’s set in a digital world where players can raise their own species of creatures called Axies.

Axie Infinity was built entirely from scratch, although the team drew inspiration from other games such as Neopets and Pokemon. It originally launched as an early access game for Ethereum gamers in October 2017, but it has since been made available for anyone to play online. The developers are currently working on additional features based on community feedback and suggestions.

Axie Infinity was one of the earliest blockchain games built with Unity 3D, which supports the development of applications that run directly in web browsers without requiring any downloads or installations. The gameplay revolves around creatures called Axies, which are unique species that can be customized with different types of body parts and colors.

Each Axie has two eyes, four legs (or arms), and some kind of head (or horn). Players battle against each other using these creatures to gain experience points and levels.

Axie Infinity is a turn-based RPG where you fight other players by training your own Axies and sending them out to battle. The game can be played in six different languages, including English. It’s also free-to-play—no payment information or tokens are needed to get started!

One of the most popular games of the year, Axie Infnity is a creature collecting game where you take on the role of a Father Axie. You will go on an adventure to find eggs and raise your young. You can collect various mutant and hybrid axies, as well as other different types of animals. Each Axie has their own special ability that you can use to help fight against enemies and collect treasure.

The Battle Arena mode allows you to fight against other players’ Axies and earn rewards based on your performance.

Throughout your journey in Axie Infinity, there will be plenty of other things for you to do like leveling up your Axies and unlocking their abilities, decorating their habitats, battling other players’ armies and more!

This game is not just a game. You can buy an Axie for as low as $0.05, and you can sell it for up to $0.07 (I wouldn’t recommend it, though). The point is that you can earn money from playing this game.

Axie Inifnity has four different leagues: Bronze League (1 rank), Silver League (2 ranks), Gold League (3 ranks) and Diamond League (4 ranks). To advance your Axie to the next league, you need to collect 30 Stars of that respective league. Each star gives a certain amount of points depending on the league, so if you want your Axie to be in the highest league, you need 100 Stars.

To increase your rank or level in a particular league, you will need to get enough participation points. Participation Points are gained by battling with other players’ Axies or winning tournaments.

AXS is the native currency of the Axie Infinity ecosystem. AXS is used to purchase items in the AXIE Shop, participate in AXIE Battles, and more. AXS price fluctuates based on supply and demand. When more people want to buy AXS, the price goes up. When there are more AXS available than people want to buy, the price goes down. You can track the real-time price of AXS on CoinMarketCap.

Here’s a brief tutorial on how to play Axie Infinity

This project is pretty new, but it has the potential to be one of the most exciting games out there. To take it a step further, Axie Infinity has a built-in marketplace that lets you buy and sell your Axies! You can even make money by playing the game!