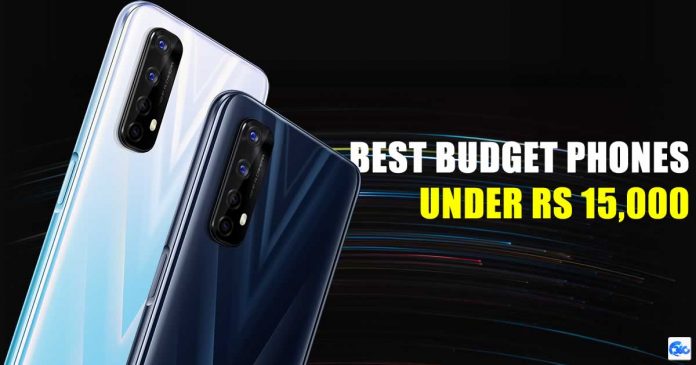 When we say a budget-friendly device, it has to be between the Rs 10000 to Rs 15000 category, which is one of the most competitive categories for smartphone manufacturers and confusing one for buyers like us.

Mainly this category is being dominated by Realme and Xiaomi. Both of these companies launch feature-filled budget smartphones and price it very aggressively under 15000 — since that is one of the most common and affordable categories.

So, the Android smartphones under Rs 15000 category never go old because I think every two months, a new smartphone is launched under the price of Rs 15000.

If you have a budget around Rs 15000 and you want everything- good cameras, great gaming performance, large and decent display with a long-lasting battery, and if possible fast charging too. There are a lot of phones available under this price range; also, brands are launching new budget smartphones almost every week with similar features — so of course, you might get confused while choosing the right one.

So, here we have done the research and provided a list of awesome value for money smartphones to help you select the best budget smartphones under Rs 15000.

Realme Narzo 20 Pro is the first budget Android smartphone to come under the Pro badge in the Narzo series. It comes with a powerful Helio G95 SoC, which is an upgrade to the powerful Helio G90t that we have seen in Redmi Note 8pro and the Realme 6.

G90t itself was a very powerful chipset that offered really good gaming performance and had decent battery efficiency too, so naturally an upgrade will also perform better.

The Narzo 20 pro also supports 65W SuperDart charging, and the best part is that the charger is provided in the box itself. This kind of fast charging is only available in very few flagship smartphones. The 4500 mAh battery can be charged in mere 38 minutes by that 65W charger, which is a killer feature not offered by any other Android smartphone under Rs 15000.

It has a 6.5 inch(1080×2400) FHD+ 20:9 display with a 16MP Sony IMX471 punch-hole camera in the top right corner, so it doesn’t disturb your viewing experience at all. The display also has a refresh rate of 90Hz to give you a very smooth experience of scrolling. The screen is protected by an unspecified version of Corning Gorilla Glass.

Realme Narzo 20 Pro has a 48-megapixel primary; a second 8-megapixel wide-angle lens; a third 2-megapixel portrait camera; a fourth 2-megapixel macro camera, which I don’t think anyone uses it.

Realme Narzo 20 Pro runs on Realme UI 2.0, which is based on Android 10 and has 6GB ram with 64/128GB of inbuilt storage that can be expanded via microSD card with the dedicated slot. Black Ninja and White Knight are the available colors.

The Narzo 20 Pro starts at Rs. 14,999, and no other phones can offer such hardware and specifications except Realme 7, which comes with a 30W charger, which felt dumb. I don’t know why Realme launched Narzo 20 pro and Realme 7 with the same features with a few more additions to the Narzo 20 pro and priced it the same. The only difference is that Realme 7 has a 64MP primary camera and 5000 mAh battery.

Realme launched Realme 6 as the competitor to the best in the category Redmi Note 8 Pro using the same Helio G90t chipset of it. In addition, Realme put a 90Hz smooth display that the Redmi didn’t had.

As far as the camera is concerned, it has 64MP primary, 8MP ultrawide, 2MP macro, and a 2MP depth camera for portrait shots and a 16MP camera for your selfies. Video recording maxes out at 4K 30fps. EIS is supported at 1080p 30fps, so no stabilisation at 1080p 60fps for rear camera. The front camera supports up to 1080p 30fps. It has a battery capacity of 4300 mAh with 30W fast charging.

Everything is good in it, but I don’t think anyone would go for it when you can get Narzo 20 pro or the Realme 7 at the same price.

This is an interesting device. The Poco M2 Pro comes with the Snapdragon 720G processor, which is a very powerful processor, and its rare to find this processor in this kind of budget device under Rs 15,000. The 720G is an 8nm processor making it very power efficient and very powerful.

It has 6.67 inch 1080×2400 FHD+ panel. The only problem is that it doesn’t have that high refresh rate screen. So, stuck at 60Hz, but that gives it extended battery life. Corning Gorilla Glass 5 is used as protection.

Poco M2 Pro prices the 4/64GB variant at Rs 13999 which is pretty cool. Other variants are 6GB ram 64/128GB internal, and you can even extend the memory with the dedicated microSD slot.

Finally, we have a non-Chinese smartphone from the house of the legendary Samsung. The Samsung Galaxy M21 comes with the widely used and kind of powerful Exynos 9611. This is a common processor which Samsung has used both on the mid-rangers and the near-flagship models too. This chip is powerful enough to do normal daily usage but not that good for heavy gaming and all — but don’t get me wrong, you can do some light gaming.

It comes with a 6.4 inch 1080×2340 FHD+ Super AMOLED panel. This is the only Android smartphone under Rs 15,000 that has an AMOLED display on this list. And as you know, Samsung always has the best quality display. You can feel the “premiumness” just by looking at the display. The Corning Gorilla Glass 3 is used screen protection.

M21 has a huge 6000 mAh battery with a 15W charger. Although Samsung says it’s a fast charger is not quick enough to charge that big battery. It takes two and a half hours to charge the device.

If you don’t want a Chinese phone, then this is the only option under Rs 15,000.

Redmi Note 9 Pro is a decent device with a Snapdragon 720G processor; well, it’s the same as the Poco M2 Pro. But yeah, this phone was launched earlier than the Poco M2 Pro.

The display is also the same 6.67 inch 1080×2400 FHD+ panel at 60Hz, which is protected by Corning Gorilla Glass 3. Finally comes a slight difference, which is the 64MP main camera rest is the same as M2 Pro. Then there is the big 5020 mAh battery with 30W fast charging.

The 4/64GB is priced at Rs 13999. This phone can be counted as an alternative if you are not able to buy the M2 Pro in the Flash sale.

We back again to Realme. The Realme 6i is the only phone that offers a 90 Hz screen at the cost of Rs 12,999. This phone is powered by Helio G90t, one of the powerful and common processors in under Rs 15,000 phones to buy category. Realme 6i is the best buy for easy day to day task, and gaming performance really good.

It come with 6.5 inch 1080×2400 FHD+ LCD panel with 90Hz. A decent display that can get enough bright to see clearly at outdoors. The Corning Gorilla Glass 3 is used screen protection

It has a quad-camera setup too — 48MP primary, 5MP wide, 2MP macro, and 2MP depth sensor. Supports video recording up to 4K 30fps and EIS available till 1080p 30fps. Also, it has a 16MP front camera for your selfies, which is pretty good and can support upto1080p 30fps for videos. The numbers might seem good, but the camera is average, but still the best in this price range. It has a big enough battery of 4300 mAh, which comes with a 30W fast charger.

This is the entry level smartphone offering from the Redmi Note 9 series. The Redmi Note 9 is powered by the Helio G85 processor. G85 is a powerful processor that can easily do daily tasks, and you can do some good amount of gaming too.

This has a 6.53 inches 1080×2340 FHD+ LCD panel. Big and bright enough for entertainment and gaming. Corning Gorilla Glass 5 is used as protection.

This phone has a quad-camera setup too — 48MP primary, 8MP ultrawide, 2MP macro, and a 2MP depth sensor for great portrait shots, you can do video recording at 1080p 30fps. Also, it has a 13MP punch-hole selfie camera, which also can record videos at 1080p 30fps. The camera is pretty good as per the price. The battery capacity is 5020 mAh, which is really good and has fast charging of 15W.

The Realme Narzo 20 was launched with the rest of the Narzo 20 series. Narzo 20 is also powered by Helio G85 processor, which is a very capable processor. Narzo 20 comes with a 6.5 inch 720×1600 HD+ display with a waterdrop notch, sadly, no full HD.

It comes with a triple camera setup — 48MP primary, 8MP wide-angle, and a 2MP depth sensor for portraits. It offers video recording at 1080p 30/60fps. Also, it has an 8MP selfie camera that can shoot 1080p 30fps videos. Narzo 20 has a massive 6000mah battery with 18W fast charger, which is a really good thing when you look at the price.

Poco M2 is the toned-down version of Poco M2 pro. This phone is powered by Helio G80 processor, a pretty powerful processor that can easily manage day-to-day tasks and play some heavy games.

M2 comes with a 6.53 inch 1080×2340 FHD+ LCD panel with a dewdrop notch — which is a really good display for entertainment and gaming. The Corning Gorilla Glass 3 is used screen protection.

Narzo 10 is one of the first phones under the Narzo series. This phone is also powered by the Helio G80 processor, which powerful enough for daily tasks and some gaming.

It has a 6.5 inch 720×1600 HD+ LCD panel, which is pretty good and enough for watching videos and playing some games. The Corning Gorilla Glass 3 is used screen protection.

Narzo 10 also comes with a quad-camera setup — 48MP primary, 8MP ultrawide, 2MP macro, and 2MP depth sensor for portraits and video recording maxes out at 1080p 30fps with EIS. It also has a 16MP front camera for your selfies and record videos at 1080p 30fps. This phone also has a big 5000 mAh battery with an 18W fast charger included in the box.

All of these phones offer really good features under the price of Rs 15000. Some of them can even match up to some premium phones. There are many more phones available under Rs 15000 but tried to show you the best that we thought.

I hope this article was helpful to reduce your confusion while buying the best smartphone under Rs 15000. Also, if you are looking for low budget smartphones, don’t forget to check out our list of best phones under Rs 10000.