The latest and most improved version of Apple’s operating system for iPhone, iPad, and iPod touch devices, iOS 9 is now available for download.Recently Apple launched next generation iPhones – iPhone 6S and iPhone 6S Plus along with some other products and now they released iOS 9 for download.

New features include live wallpapers, better battery life, a smart news app and an updated keyboard.Other additions include a News app, which contains stories specially selected by the tech giant, Proactive Assistant which resembles Google Now, and updated HealthKit tools. Apple has also added an app that makes it easier for Android users to switch to iOS.Called ‘Move to iOS’, the app securely transfers contacts, message history, camera photos and videos, web bookmarks, mail accounts, calendars, wallpaper, and DRM-free songs and books.To boost security, default pin codes are now six digits long rather than four which Apple said increases the possible combinations from 10,000 to one million, and is therefore more secure against hacking.

So how to download and install iOS 9 to your iPhone, iPad or iPod Touch.Follow this simple guide and made it happen.
If your device is running iOS 8, then it is eligible for the iOS 9 upgrade. This year Apple hasn’t discontinued OS upgrade support for any devices, but some features such as split-screen multitasking for iPad will only work on the newest devices.
The following iOS devices will get the iOS 9 update. 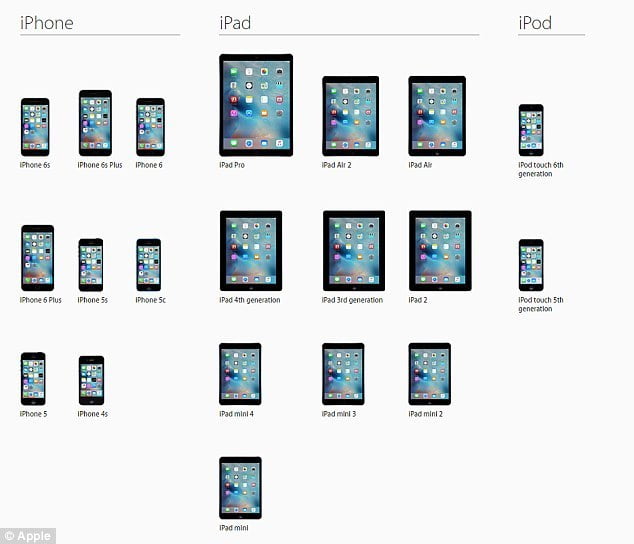 The iPad Pro, iPhone 6s, iPhone 6s Plus, and iPad mini 4 will ship with iOS 9 pre-installed, and hence don’t appear in this list.

Back up Your Device

First of all before any update Apple advises people back up their device to iCloud or iTunes.So first backup your device.

You can do this via iCloud or iTunes, but we recommend that you do it via iTunes, because it doesn’t require an Internet connection. Here are the steps to take a backup of your iPhone, iPad, or iPod touch using iTunes.

If you don’t have access to a computer, then you can use iCloud Backup. Only 5GB is free and you’ll have to pay Rs. 60 per month for additional storage on iCloud.

After back up its the time for updating your old iOS to new one iOS 9.You can quickly install iOS 9 on your Apple device directly via your iOS device or iTunes.

The iOS 9 update is big download, but the amount of free space required on your device is lesser than iOS 8, so there are unlikely to be troubles like last year when you are installing iOS 9. Here’s how to get the iOS 9 update over-the-air (OYA).

For people who can’t update wirelessly, or those who want to update with iTunes, follow these steps:

So what are you waiting for, start your updating process and follow the most advanced Apple’s operating system, iOS 9