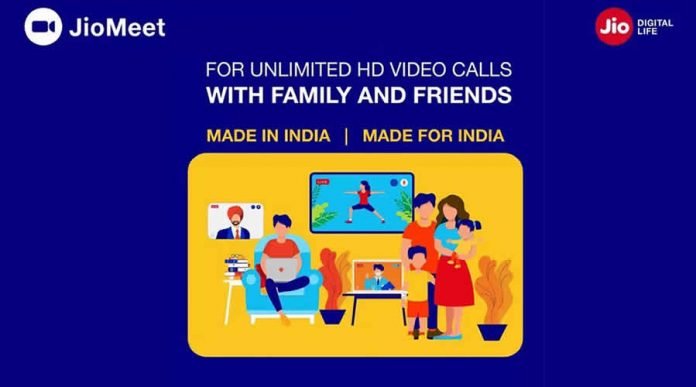 To promote the ‘Made in India’ initiative, the popular telecom operator Jio has now introduced its own video conferencing platform — JioMeet.

JioMeet offers unlimited number of free video and audio calls in high definition (720p) to users and supports as many as 100 participants at once. According to the company, free calls can be uninterrupted for ‘up to 24 hours’ long.

The new video conferencing app is rolled out for both Android and iOS users in the country, and soon the company is going to release the desktop version too.

To get started with JioMeet, users require a valid phone number or the email ID and also requires to create a Meeting ID to join or invite people to a video calling session. There is also an option in the app to send text, voice messages, files, and images to one another.

Additional features in JioMeet include the ability to schedule meetings, active speaker layout, password-protected meetings, Waiting Room, screen-sharing feature, Safe Driving mode to video call while driving, multi-device support (up to 5 devices), and the ability to switch to another device with ease.

Recently, Govt. of India ha banned 59 Chinese apps, including hugely popular TikTok and UC Browser due to privacy and security issues followed by a huge economic backlash against China following the June 15 clashes at Ladakh. So presently, India’s homegrown apps are getting more and more popularity, and citizens are encouraged to support Made in India’ initiative.

And JioMeet is going to be the Indian alternative to the popular video calling and video conferencing apps like Zoom, Google Meet, and Microsoft Teams.