Finally, Xiaomi unveiled most awaited affordable dual camera phone — Mi A1 in India at an event held in New Delhi.

Unlike other Xiamoi smartphones, Mi A1 is the company’s first flagship phone powered by stock Android 7.1.2 Nougat instead of MIUI. With Mi A1, Google’s Android One is back to Indian market after 3 years with the tagline of “created by Xiaomi, powered by Google”.

The last time India got Android One phones with the promise of pure Android and regular updates was in 2014. Google had then partnered with Micromax, Karbonn and Spice Mobiles.

Mi A1 hardware is identical to the Xiaomi Mi 5X — another dual camera smartphone launched in China with custom Android MIUI. Mi A1 features  5.5-inch 1080p screen, a metal body, and a dual-camera system that includes a secondary telephoto lens for 2x zooming and portraits with shallow depth of field.

The phone is also powered by Qualcomm’s Snapdragon 625 processor — promises a great balance between performance and battery life — and standard 3080mAh battery. Also, the phone is equipped with a fingerprint scanner and Mi A1 phones will come with dual pyrolytic graphite sheets which will help diﬀuse and radiate heat quickly. Also, Mi A1 also comes with a USB Type-C port.

Mi A1 is completely secure as the phone is powered Android One, runs pure interface and with Google Play Protect and monthly security updates. Also, Mi A1 will get Android Oreo by the end of the year, and Xiaomi says it’ll be “one of the first” phones to get Android P.

The Xiaomi Mi A1 comes in Black, Gold or Pink and costs INR14,999. It is going to be available in 37 countries across the globe and sales are starting on September 12 in various online and offline stores. 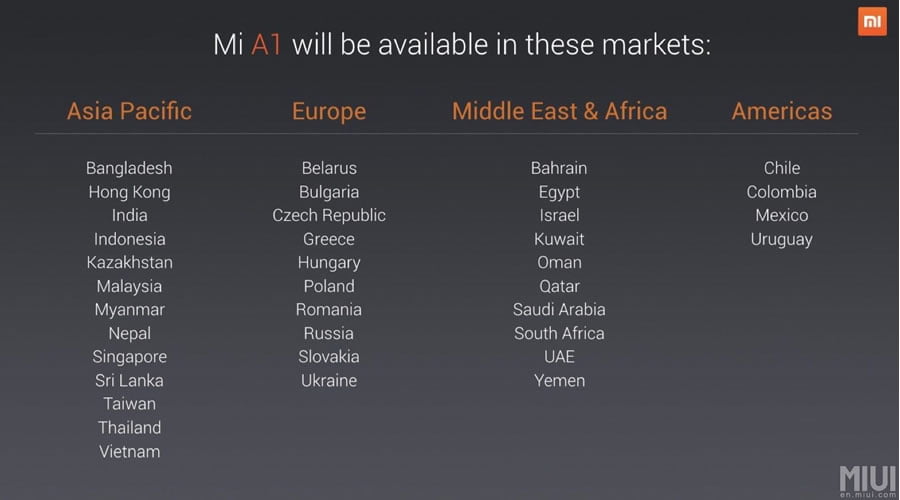