Also Read : A Sweet Journey Of Android From HTC Dream to Marshmallow

Android Marshmallow, launched in early October, is only on 1.2 percent of Android devices, according to the latest stats offered up by Google’s Android Developer Dashboard.

Google traced the market share of each version of Android by checking all the devices that visited the Google Play Store during the seven-day period ending Monday. 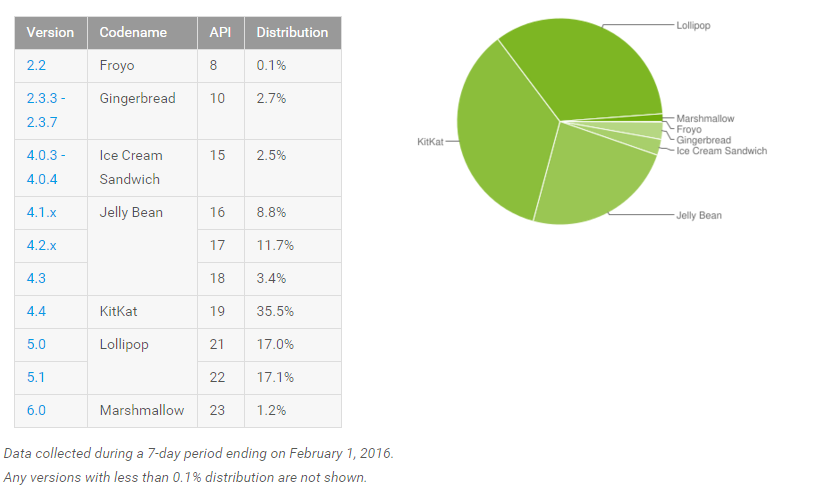 Also Read : Now it is Easier to Take Screenshots in Android 6.0 Marshmallow

According to the reports,  Android, Lollipop, which was first released in 2014, gained more users during the past month to lick off a 34.1 percent slice of all devices.

Lollipop’s predecessor, KitKat, lost traction with a 35.5 percent share but still retained its title as the most dominant version of Android. By next month, Lollipop should have surpassed KitKat to capture the No. 1 spot.

Jelly Bean’s share dipped to 23.9 percent from 24.7 percent last month. Gingerbread and Ice Cream Sandwich, which were both released in 2011, also lost users but hung in there with shares of 2.5 percent and 2.7 percent, respectively. Even Froyo, which debuted back in 2010, remained on the list with a 0.1 percent cut.

Why Android Marshmallow In Limited Devices ?

It could be down to people being wary of bugs and unresolved issues, or phone brands taking their sweet time seeding the update to their device lineups.

A decent possibility is that no one is using devices new enough to get the Marshmallow update early, which suggests that the new Nexus 5X and 6P has less takers than we thought. LG is offering it on some of its flagship G4 smartphones. Other manufacturers, such as Samsung, have announced plans to start pushing it out early this year, which should increase Marshmallow’s growth rate.