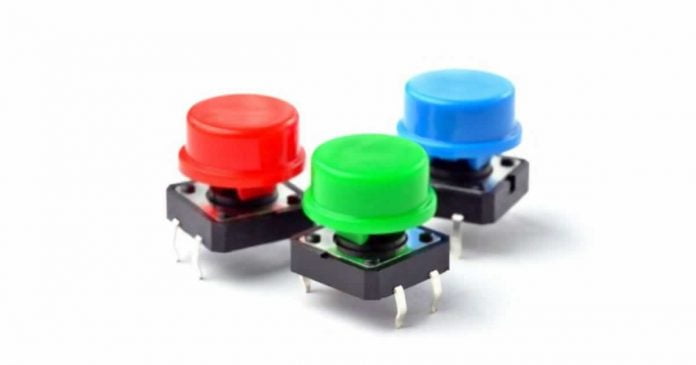 Tactile switches are a useful type of pressure switch that is only on when there is some form of pressure being put onto them. As soon as the pressure is released, the switch returns to its off position, meaning no current is flowing through. Due to this, tactile switches have become well-used types of switches in all kinds of electronics, ranging from entertainment devices to important machinery.

They are more suited to low-power devices that require operator feedback for proper functioning. Here are some of the amazing uses of tactile switches.

The functionality that tactile switches allow is a perfect use for buttons in various devices. As they are used to complete circuits momentarily, they’re perfect for input devices that can have many different options. Stuff such as video game controllers use tactile switches that allow you to control your games and characters within it. Television remotes also use tactile switches for their buttons, as again each press completes a different circuit, corresponds to a different function, and transmits that function to the television through infrared light and more recently Bluetooth connectivity.

Tactile switches were also used in both landline and mobile phones for number buttons but has recently been phased out by touch screens that can call tactile switches their ancestor.

The use of tactile switches as buttons is so widespread in fact, that the keyboard buttons used to write this article use tactile switches too, demonstrating the widespread uses of this type of switch. When each key is pressed an electrical circuit is closed, sending a signal to the computer to tell what letter, number or symbol is required to be shown on the screen.

Tactile switches are used often in various electronic music equipment such as keyboards and drum machines. These operate in a similar way to computer keyboards, however, have enhanced functionality to make it more suitable to play music on. Depending on the quality of the device, some tactile switches can also use the amount of pressure put onto it to change the amount of current and output. This can be used in keyboards and drum pads to make the sounds louder or higher in pitch and gives these devices a more authentic feeling that many musicians would appreciate.

Most smartphones utilize some form of a pressure sensor as part of its mobile security system to unlock a device. The iPhone is most notable for this, being one of the first devices to transition from a press button that clicks to one that just requires pressure to register an input.

Smartphones are an area where we can see the evolution of tactile switches as they’ve now developed into fingerprint sensors. These still work essentially the same as tactile switches always have, but now with more detail as they can now create a pressure map of the finger, taking into the account the ridges in your finger to build an accurate fingerprint, enhancing the security system.