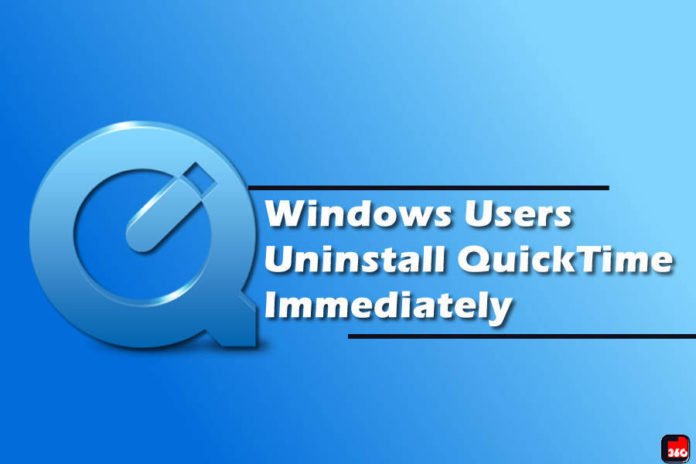 Cyber security team at the US Department of Homeland Security is advising all Windows users to uninstall QuickTime as soon as possible to avoid getting hacked. Recently some vulnerabilities has been discovered in QuickTime video player and Apple has no plans to patch them.

Also Read : WhatsApp turned on the encryption within the app, but why and how exactly it affects WhatsApp users ?

Why You have to Uninstall QuickTime ?

Security firm Trend Micro says it has discovered two critical vulnerabilities in the latest version of QuickTime 7 media player designed for Microsoft Windows users, which could be used by hackers to hijack computers if users accidentally were to click on a malicious link or open a malicious file.

Usually, Apple would patch any vulnerabilities found in its programs, but in this case, Apple is phasing out QuickTime 7 and the official advice from Apple is to completely uninstall the software.

And the interesting part of the story is US Department of Homeland Security is also advising the Windows users to uninstall QuickTime too.

The United States Computer Emergency Readiness Team (US-CERT) on Thursday issued an alert, says — ” Computers running QuickTime for Windows will continue to work after support ends. However, using unsupported software may increase the risks from viruses and other security threats. Potential negative consequences include loss of confidentiality, integrity, or availability of data, as well as damage to system resources or business assets. The only mitigation available is to uninstall QuickTime for Windows.”

The vulnerability does not effect QuickTime on Mac though. There have been no reported uses of the vulnerability in the wild, however, that could easily change in the future. QuickTime for Windows is still available for direct download from Apple’s website, even though the software hasn’t been updated since January.

If you have been using iTunes on your PC you may be running QuickTime and need to uninstall. To do so, go ” Control Panel > Category View > Programs > Uninstall ” a program. Select QuickTime, click uninstall, and you’ll finally be free.

Also Read : Learn how to encrypt Android or iOS devices and stay protected