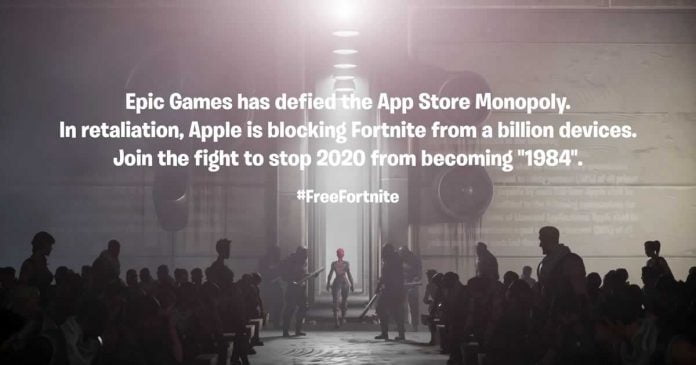 If you can’t find Fortnite in the AppStore or Google Play, it is not the fault of your smartphone, but the application has been apparently kicked out by Apple and Google from their stores.

On Thursday, Epic Games implemented an update to make in-app purchases from Fortnite’s iOS and Android app — a new payment method that violates the rules imposed by Google and Apple, resulting in the ban on the popular battle royale shooter from the two stores.

So what’s this new payment method?

The apps on mobile devices are still mostly dependent on the large stores of the operating system providers. So Epic Games launched a new update on Thursday — a direct payment option for the purchase V-Bucks, the virtual currency of Fornite with which to buy emotes and skins. Using the new payment method, in addition to having a 20% discount on the final price, both users and Epic Games do not have to pay the 30% “fee” to Google and Apple.

The new in-app purchase option, however, violates the rules of the two online stores.

Epic Games vs Google and Apple, the war ends in court

The explanation of Apple and Google is very simple: Epic Games has violated the rules respected by all developers, and for this reason, the Fortnite app has been deleted from the Google Play Store and App Store.

Although the response of Epic Games came fast, Fortnite creators immediately filed a lawsuit in a California district court against the monopoly of these big companies. Now the diatribe between Epic Games, Google, and Apple will end in court and could mark a historic turning point for the entire mobile app industry.

Epic Games has also launched a social campaign with the hashtag #FreeFortnite — which in a few hours, has collected thousands and thousands of posts. In an article published on the videogame’s official blog, Epic Games invites players to send messages to the official AppStore account using the hashtag and asking for more freedom for developers.

So now what happens to the existing players

On this point, we must be clear: those who have already downloaded the app will be able to continue playing on their smartphone without any problem, at least for the moment. However, Apple has announced that users will no longer be able to update the Fornite app or even play the next season of the video game.

The situation for Android users is a bit different. Those who have downloaded the app from the Google Play will no longer receive app updates, as happens for iOS users. But on Android, the Fornite app can be downloaded directly from the Epic Games store, bypassing this limitation.

When and whether Fortnite will appear again in the AppStore and PlayStore is currently not foreseeable.