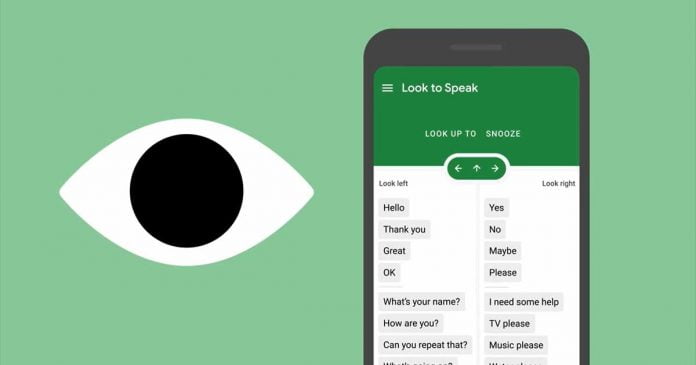 Google takes another step forward in terms of accessibility with the launch of Look to Speak, the first app that allows you to speak with your eyes.

Look to Speak seeks to help people with disabilities to speak using their eyes. It is a project that is part of the “Experiments with Google” program and is reminiscent of the Talk project by Samsung and Irisbond.

Speech and language therapist Richard Cave says on the Experiments with Google blog that they have been inspired by assistive technologies that detect eye movement and have tried to make them available to everyone in the world. The team started working on the project earlier this year, and they recently released the app, which is now available on all devices running Android 9.0 or higher, including Android One.

The application takes advantage of the smartphone’s front camera and allows people with speech impairments to communicate with nearby people in a simple and effective way. The user simply has to look to one side or the other of the screen and select a phrase so that, later, the mobile will pronounce it aloud and allow the person to express their feelings or needs.

Unlike other assistive technologies, Look to Speak does not require any additional components. Simply download the application to your mobile device and start using it.

According to Google, Look To Speak has worked very well in areas where other assistance systems did not achieve as much — good results such as in the shower, outdoors, or in a car. The project is in full development, and updates will be coming soon that will improve its functionality.