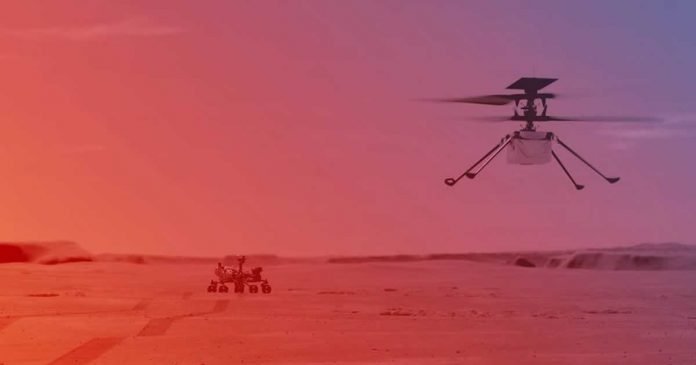 Finally, NASA Ingenuity mini autonomous helicopter has completely separated from the Perseverance rover on Mars. And perhaps we can witness the first flight this April.

As NASA itself has confirmed on Twitter, the first flight for Ingenuity should take place on April 11 at the earliest, with the hope of receiving data on Earth the next day, on April 12. The helicopter should rise about 3 meters high and hover for about 10 seconds. Then NASA is planning up to four more flights. These should take up to 90 seconds.

Ingenuity is a 1.8-kilogram mini helicopter powered by a double rotor. It landed with the rover Perseverance on February 18, 2021, and is the first aircraft to bring humans to Mars. Ingenuity is equipped with a camera. This is the first time NASA is going to explore Mars from the air.

But why is it so important? Far from the fact that not only has Ingenuity been able to land on Mars is an achievement, but we also must not stop thinking that it is not the same to fly a drone on Earth than on a completely different planet with a totally different atmosphere.

Mars, in the words of NASA, has an atmosphere 1% denser than Earth and receives up to half the solar energy on a Martian day. Temperatures can therefore drop to minus 50 degrees, freezing Ingenuity and destroying it.

The helicopter will use solar energy to recharge and heat its electronic components to avoid precisely that freezing. And it is not easy.

The idea is to check how these small devices manage to adapt to the meteorological events of Mars, with an air thinner than that of Earth. Also, the gravity of Mars is a third of that of the Earth, which obviously affects the tests.