On October 2, Google completed the process of its transformation into a holding company called Alphabet. And the company on Friday released a new code of conduct in its website that does away with the iconic “Don’t be evil” slogan that was first revealed when the company went public back in 2004.

A report by the Wall Street Journal pointed out that the corporate code of conduct now entreats employees to “do the right thing – follow the law, act honorably, and treat each other with respect.”

According to the report, the Google code, which was written for its 2004 IPO, is much longer and includes rules relating to co-worker relationships, pets, and at-work alcohol consumption, while Alphabet’s sticks to the basics, like avoid conflicts of interest, maintain integrity and obey the law. 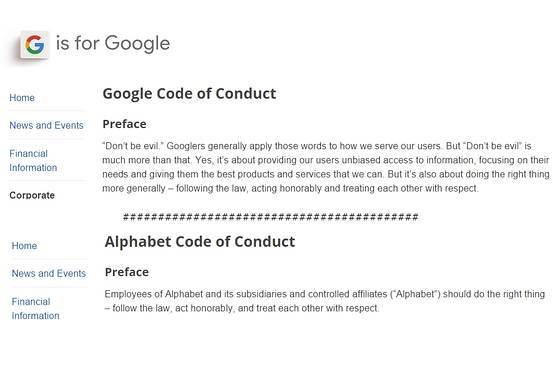 In conversation with Wall Street Journal, a Google spokesman said,

“Individual Alphabet companies may of course have their own codes to ensure they continue to promote compliance and great values. But if they start bringing cats to work, there’s gonna be trouble with a capital T.”

However, what has caught popular attention is the new Code of Conduct put up by Alphabet on its website. It says,

“Employees of Alphabet and its subsidiaries and controlled affiliates (“Alphabet”) should do the right thing – follow the law, act honorably, and treat each other with respect.”

As a few folks on Twitter have pointed out, the general nature of Alphabet’s code of conduct leaves the door open for the company’s many subsidiaries to come up with more tailored codes of conduct of their own.