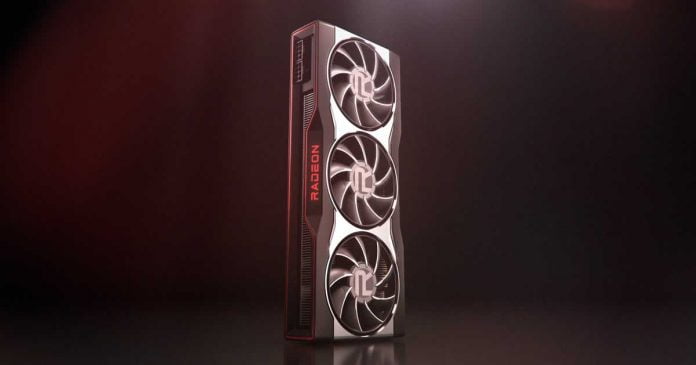 AMD has released a first picture of the upcoming Radeon RX 6000. The graphics card based on the RDNA2 architecture will be equipped with a new cooler design. The large cover of the RX 6000 houses three fans in the reference design.

The rendered image also shows two 8-pin power connections, so it can be assumed that the unspecified Radeon RX 6000 requires more energy than the current Radeon RX 5700 XT. This has an 8-pin and a 6-pin connection and is satisfied with 225 watts under load.

If you want to see the new graphics card from every angle, you can do so in Fortnite, where it has been virtually immortalized.

The 3D model shows two Displayport, one HDMI, and one USB-C output on the 2-slot cover. Nvidia had introduced the USB-C based Virtual Link in the Geforce RTX 2000 (Turing) but removed it again in the current Geforce RTX 3000 (Ampere).

The Radeon RX 6000 is based on the Navi-2X chips, which use the improved RDNA2 architecture. AMD states that the performance per watt should increase by 50 percent compared to RNDA1, although a 7-nm process is still used. Navi 10/12/14 are based on TSMC’s N7P (DUV), AMD has not yet made a specific statement for the Navi 2X.

AMD announced in the summer of 2020 that at least one of the RDNA2 pixel accelerators would appear before the next-gen consoles. The Xbox Series X and Xbox Series S both start on November 10, 2020. There is no date for the Playstation 5 yet. All three consoles use an RDNA2 graphics unit for functions such as hardware-accelerated ray tracing.