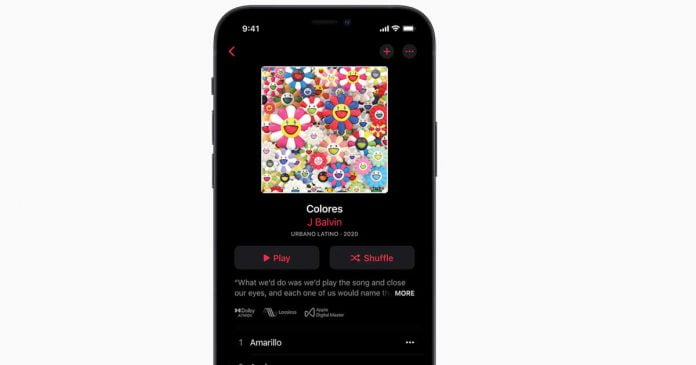 Apple announced the new generation of Apple Music with a special emphasis on sound quality. From June, subscribers can enjoy spatial audio with support for Dolby Atmos, as well as being able to listen to the more than 75 million songs in the service’s catalog in lossless quality.

With new update, Apple Music thus raises the bar against Spotify, Tidal and Amazon Music to face the rise of Hi-Fi quality — increasingly demanded among the different streaming services and that has led to the loyalty of users more specialized in music.

“Apple Music is making its biggest advancement ever in sound quality,” and “Apple Music as we know it is about to change forever,” said Oliver Schusser, Apple’s vice president of Apple Music and Beats.

At the start of June, 20 million titles are to be available in Lossless Audio; by the end of the year, all songs are to be offered lossless. Apple uses its own codec for this with ALAC (Apple Lossless Audio Codec). To listen to lossless audio, subscribers using the latest version of Apple Music can enable the feature under Settings> Music> Audio Quality. Here, they will be able to choose different resolutions for different connections, such as mobile, WiFi, or to download.

In addition, Apple specifies iOS 14.6, iPadOS 14.6, macOS 11.4, and tvOS 14.6 on the respective devices as a requirement for lossless audio in Apple Music.

With spatial audio with Dolby Atmos, on the other hand, will only be available on selected, specially recorded titles for the time being. Albums that are available in Dolby Atmos will have a badge on the details page so that they can be easily discovered.

By default, Apple Music will automatically play Dolby Atmos tracks on AirPods and Beats headphones that have the H1 or W1 chip, “as well as on the speakers built into the latest versions of iPhone, iPad, and Mac,” the company explains.

On the same day that Apple Music has announced its HiFi sound, Amazon Music HD has announced that it is lowering its prices. This price reduction allows users to be able to listen to music in HD and Ultra HD at no additional cost. So it is presented as a good alternative to consider.