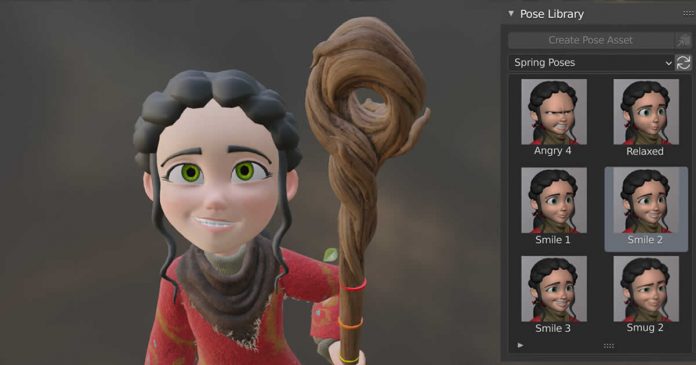 The community of the free 3D graphics suite Blender has presented its plans for 2021. It contains a number of innovations and improvements that are only possible at all thanks to the industrial cooperations that have now grown significantly.

For example, graphics card manufacturer Nvidia is working on full support for the USD file format. The abbreviation stands for Universal Scene Description and was created by the Hollywood studio Pixar for a scalable exchange of animated 3D scenes, including their assets.

USD is designed as a kind of open standard, is completely available as open-source software, including detailed documentation, and is already used by some companies independently of Pixar, including Nvidia. The free software Blender already supports the export of USD files; the next step is to create an import function in the graphics software.

There are also some other ideas to better support the Pixar file format in Blender. The work on the USD importer is already in the review phase and will soon be made available in one of the upcoming publications.

The classic drawing backend, which was previously based on OpenGL, will also be expanded to include Vulkan support this year. This should also help to make the real-time renderer Eevee more efficient. The developers do not expect an increase in performance, but the Vulkan Support should make Blender fit for the future.

Together with Facebook, the Blender team has also significantly improved the rendering API of the Cycles renderer. This work should be deepened with a permanent position in the development team.

The team also wants to completely revise its asset browser and the so-called Pose Library, with which various poses or expressions, for example a 3D figure, can be easily archived and managed in a project. This work is done together with the Blender Studio for the work on the Open Movie project Sprite Fright.

The new Pose Library will also be integrated into the Blender editors, which will be available in the upcoming version 3.0. A complete pipeline for character animation, which should also withstand the demands of a feature film production, is to be created in Blender.

As a short-term goal, the team is currently working on the upcoming version 2.93, which is available as a beta and will be provided with updates for two years as part of long-term maintenance. This will be the second LTS version ever after the team took this approach to product maintenance for the first time in around 20 years with version 2.83. The upcoming version 3.0 should follow in the third quarter of 2021.