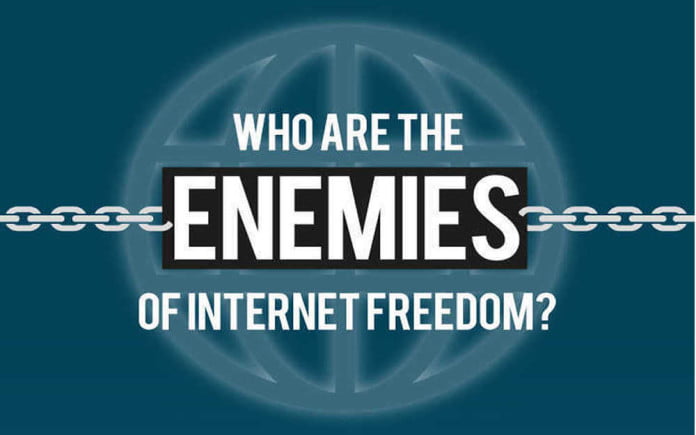 Today we are talking about internet freedom.

The Internet is the vast ocean, the World Wide Web is home to over a trillion gigabytes of data. The total number of websites online has just exceeded 1 billion, with hundreds of new sites going live every day.

The NSA is a famous example. In the name of security, they monitor United States citizens’ online activity, both public and private, on Google, Facebook, Skype, and even by spying on your smartphone.

But the US isn’t the only country keeping a close eye on your every move: Countries on every continent have formed special organizations and task forces to control our internet freedom. They monitor the activity of not only their own citizens but of people around the world.

And they’re not only monitoring activity, but restricting it as well. Any website deemed illegal or harmful to their citizens is blocked, including news sites, blogs, and even social media. In some countries, they can even enter your home to search for illegal media if evidence of your activities is found online.

Who’s watching your every move online?

The NSA knows what you’re up to — but they’re not the only ones. Even countries you may think of as valuing the freedom of their citizens may not be governed by people who believe in a free Internet. So check out the infographic from Whoishostingthis and see who’s doing the watching.

What are you thinking about internet freedom? Do you agree with government organization spying on your online activity? We’d love to hear from you in the comments!