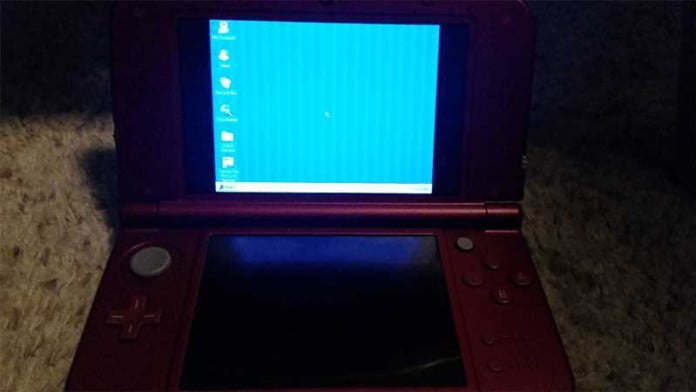 Earlier this week, we heard PlayStation 4 hacked to run Linux. And now again a hacker made a console to run one of the oldest Windows OS. This time its Nintendo 3DS. Yes, don’t be surprised – Nintendo 3DS is now a PC.

In a post to a Game Boy forum, a user named Shutterbug2000 demonstrates Windows 95 running on a new Nintendo 3DS XL using an x86 emulator, DOSbox emulation – which runs on top of MS-DOS as a sort of graphical shell.

“Back a while ago, I tried compiling the dosbox from libretro, and using retroarch to emulate dosbox. Yet, every time, it froze on a rainbow glitchy mess. So, I gave up for a while. Until tonight,” — wrote Shutterbug2000 in the forum post. “So, I tried it on my n3ds, and it just worked. So, I think the o3ds just isn’t powerful enough to run dosbox, or there’s not enough ram. So, that’s how this all got started. At it’s core, this is just libretro/retroarch dosbox. But I figured, hey, everyone want’s Windows on their 3DS, right?”

Shutterbug2000 uploaded a YouTube video that shows a Nintendo 3DS displaying the cloudy Windows 95 boot screen and running Scandisk, but that ends before the desktop appears.

The incomplete video led some readers to question the method’s veracity, so Shutterbug2000 uploaded the code needed for other users to run Windows 95 on their own 3DS units. Other posters verified that it worked for them as well.

Nintendo 3DS XL can run Windows 95, but it’s unclear just what you’ll be able to do in the OS. The entire experience is a bit laggy, Shutterbug2000 notes, and it’s doubtful that you can connect to the Internet in any capacity via your 3DS-based Windows 95. Mapping keyboard buttons to the small number of buttons on a Nintendo 3DS presents challenges, too.

Did you try to run Windows 95 in your Nintendo 3DS using the code provided by Shutterbug2000 ? Then tell us your experience. We love hear from your comments !