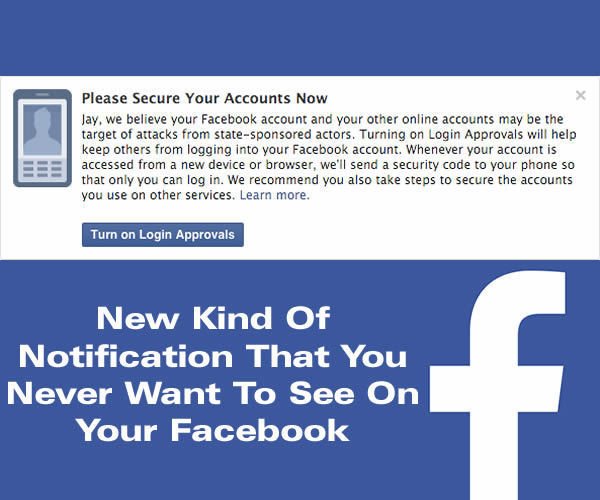 Facebook added a new kind of feature that will help you to secure your accounts from hacking. Now Facebook will notify if your account has been hacked by an attacker who is working on behalf of a nation-state.

A blog post has been shared on Facebook on Oct. 17, saying the protection of its user’s accounts is more important than anything else, which is why it continuously monitors malevolent activities and provides a multitude of options to safeguard user accounts. The company is sending the notification to affected users as it claims these attacks are more dangerous and advanced as compared to others.

Alex Stamos, the Chief Security Officer at Facebook wrote on the blog post —  “While we have always taken steps to secure accounts that we believe to have been compromised, we decided to show this additional warning if we have a strong suspicion that an attack could be government-sponsored. We do this because these types of attacks tend to be more advanced and dangerous than others, and we strongly encourage affected people to take the actions necessary to secure all of their online accounts. “

“Please Secure Your Accounts Now. Jay, we believe your Facebook account and other online accounts may be the target of attacks from state-sponsored actors,” reads the sample desktop notification users will receive if their accounts have been compromised.

So if you get that Facebook notification, you should take it seriously. The notification does not indicate that Facebook’s own system has been compromised. Rather, the warning may suggest that users’ computers or smartphone houses malware that cybercriminals are using to gain illegal access to their accounts. The company recommends rebuilding or replacing any system that may have been infected by malware, as well as turning on login approvals.

Facebook added it does not disclose how they attribute particular attacks to hackers to safeguard the integrity of its processes and methods. However, it does claim it only intends to use the notifications in circumstances where the proof strongly backs its conclusion.

Additionally, turning on login approvals is a good practice to help keep other individuals from logging into other users’ accounts. Whenever accounts are accessed via new browsers or devices, Facebook will send codes to users’ phones. Facebook hopes the notification will help security-minded individuals who want to protect their data, according to Stamos. In addition, it promises it will constantly enhance its capability to detect and prevent attacks against its users.