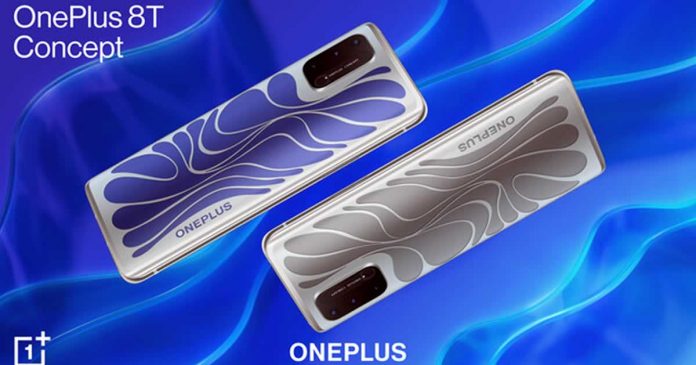 OnePlus always likes to experiment with next-generation technologies or designs that are ahead of their time. Now with the OnePlus 8T, launched in October 2020, the company decides to push the boundaries of human interaction with mobile technology once again.

OnePlus 8T Concept uses a combination of nature-inspired design and advanced technologies to create an even more natural interaction between users and the device.

The OnePlus 8T Concept is using ECMF and the high-frequency millimeter-wave sensor on the EHF band — mmWave — borrowed from the 5G cellular standard to make the interaction between the user and his smartphone even more natural in the future.

The 39-strong development team from “OnePlus Gaudi”, a concept department at OnePlus, has the OnePlus 8T Concept with electronic colors, materials, and surfaces (ECMF) and reactive sensor technology (mmWave) as a concept smartphone hung up.

OnePlus engineers drew inspiration for the colors of the new smartphone from the water flowing in the hot springs of Pamukkale, Turkey — which have become known for their mineral-rich thermal water that flows down over the white sintered terraces of a nearby hill and on the List of World Heritage Sites by UNESCO.

The electronic colors, materials, and surfaces (ECMF), as well as the metal oxide in the glass of the OnePlus 8T Concept, enable a so-called “color change film” since the valence state of the metal ions varies under the various voltages and changes the glass from a dark blue to a light silver. OnePlus would like to enable contactless notifications in the future.

In the future, OnePlus would like to use ECMF to blink or change certain areas of its smartphones as soon as a call or message is received. The user can then simply accept or reject this with a gesture without touching the smartphone.

With the help of the mmWave technology known from the 5G standard and millimeter waves, which are located with a wavelength of around 1 to 10 mm on a frequency spectrum from 30 to 300 GHz in the EHF band, OnePlus also wants to register and visualize the user’s breathing, so that the color of the ECMF area changes synchronously with breathing and can thus give the user biofeedback.

OnePlus has not yet disclosed when and in which models the reactive sensor technology based on ECMF and mmWave should be used.