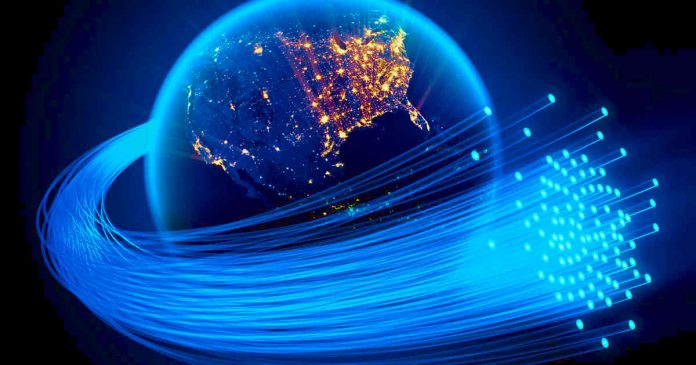 Scientists at the Technical University of Denmark (TDU) in Copenhagen used a single photonic chip connected by a single fibre optic cable to deliver 1.84 Pbit/s(petabits per second) between two points 7.9 km apart, and the data transfer was successful.

The current average bandwidth of the internet around the world is estimated to be 1 Pbit/s at all times. This new technology enables the transfer of volumes that exceed the amount of data transferred over the internet.

You probably can’t imagine how fast 1.84Pbit/s is. Internet that is currently in general use, speed of probably hundreds of Mbits per second is present or at 1Gbit, and recently it has reached up to 10Gbit, but 1Pbit is 1 million GBit. This is more than 20 times faster than ESnet6 (46 Tbit/s), an upgraded version of the science network used by NASA and others.

Photonic chip technology has great potential for optical data transfer, as both the processor and the transfer medium operate on light waves.

First, the data stream used in the experiment was split into 37 lines, each sent over a different optical fibre in the cable. The 37 data lines are divided into 223 data chunks, each corresponding to a zone of the optical spectrum. It enabled a ” frequency comb” to transmit data in different colours simultaneously without interfering with other streams. In other words, a massively parallel space/wavelength multiplexed data transmission system was completed.

It wasn’t easy to verify the bandwidth of 1.84Pbit/s because computers cannot send, receive, or store such a huge amount of data. So, the research team used dummy data on individual channels to verify the actual bandwidth.

The photonic chip requires processing to split a single laser into many frequencies and encode optical data into each of the 37 optical fibre streams. According to a Researcher in the team, it should be possible to build a sophisticated and fully functional light processor about the size of a matchbox. It is similar in size to current monochromatic laser transmitters used in the telecommunications industry.

Replacing the matchbox-sized optical data encoder/decoder with a photonic chip-equipped device of the same size while maintaining the fibre optic cable infrastructure is surprisingly capable of increasing the data bandwidth by a factor of 8,251 compared to the current level. It’s a good result. The researchers say there is potential enough to prompt a shift in future communications system design.

And the potential of the new chip doesn’t stop there. Using computational models, the researchers measured the system’s data-transmission capability, resulting in an eye-popping speed of up to 100 Pbit/s.