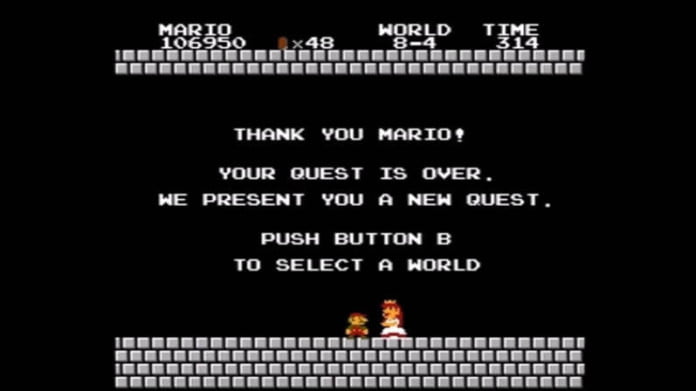 Super Mario, favourite game of 90’s kids. We all helped Mario to save his beautiful little princess from that Dragon’s bloody dungeon, but we all made Super Mario to wait a long to rescue her.

Now a die hard fan of Super Mario, a US based gamer known as Darbian has set a new world record by completing video game Super Mario Brothers in just 4 minutes, 57 seconds, 627 milliseconds.

Super Mario Bros. any% world record! On the 30th anniversary! What a ride….. 6,607 attempts @NintendoAmerica http://t.co/emm7lk8Bpq

Darbian beat Super Mario Bros. in just 4:57:627 on Sunday, beating out the previous world record of 4:57:69. So Darbian’s time shaved 66 milliseconds off the previous record, set by gamer i_o_l a year ago, underscoring the razor-thin margins that separate victory and defeat in the pursuit known as “speedrunning.”

The impressive feat was performed on an actual old school NES console. To blaze through the levels at a rapid clip involved some very deft and incredibly economical gaming skills allowing for few extraneous moves.

Twitch published a video where you can watch Darbian’s heart rate as it spikes in response to the onscreen speedrun action and gamer also posted a debriefing on Reddit.  Darbian says he made “notable mistakes,” so his record is technically vulnerable to being one-upped.

Super Mario Brothers is a 1985 platform video game developed by Nintendo. It was chosen as the No 1 game by Imagine Games Network, a rating company, in its list of top 100 games of all time.