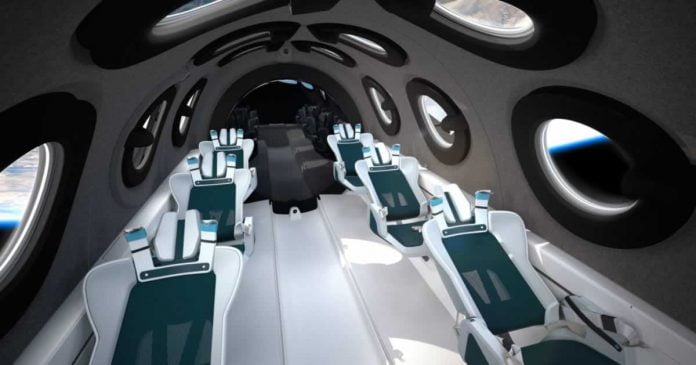 Virgin Galactic, belonging to billionaire Richard Branson, is one of the best companies for private space travel.

After several years of development of the tourist spaceship — Virgin Spaceship Unity (VSS Unity), Virgin Galactic reveals what its interior will be like, designed for astronauts to experience weightlessness and see the curvature of the earth.

The VSS Unity is the second vehicle in the SpaceShipTwo saga — an air-launched suborbital spaceplane type designed for space tourism — and the first one to show us what the space tourist cabin will be like.

Virgin’s announcement showing the interior of the ship has been totally unexpected and shows the company’s progress in its goal of bringing tourists into space.

For the design, they have teamed up with London-based company Seymourpowell, which has given the most ‘artistic’ touches to the whole spaceship, leaving the technical part to engineers.

According to the company, textures, colors and structures within the cabin create an elegance and have been selected with the utmost care to provide a sense of confidence to the astronauts.

“One of the hallmarks of the brand for over 50 years has been the use of bold and inspired design to transform the customer experience,” the company says in a press release.

The VSS Unity features reclining seats of individual size specially designed to cope with G forces. Each seat will have a small screen at the back where astronauts will be informed about the flight phase of the operation and, once in the weightless area; they will be able to make movements inside the cabin to take advantage of the 12 circular windows arranged on walls and ceilings. The ship is also be equipped with 16 high definition cameras capable of recording videos and taking photographs.

According to the company, Virgin Galactic already has 600 astronauts signed up for their tourist trips. The VSS Unity has only six seats, and until the remaining two ships leave the assembly line, they will have to queue.

Although Branson’s idea was to make the first flight in 2020, as per the latest progress, it will be 2021 the year a Virgin Galactic tourist spaceship lifts the flight.