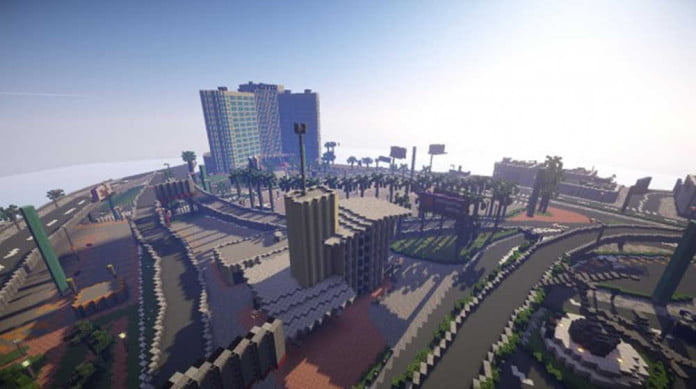 Another awesome insane work with Minecraft. Recently a group of gamers are working in the recreation of entire GTA 5 in Minecraft, block for block and the results are pretty impressive.

GTA 5 in Minecraft comes from Youtube user N11ck, who decided to team up with a bunch of friends and rebuild the city of Los Santos, as well as the surrounding areas, from scratch.

They began the project back in January of 2015, which means now they are celebrating first year of GTA 5 in Minecraft.

Following is a clip the team recently put together called “GTA 5 In Minecraft Cinematic #1,” which sums up much of the work the team has pulled together so far.

The team isn’t making a world that looks like the game world of Grand Theft Auto V, but are instead building the entire map in a 1:1 scale.

The whole shebang measures around 7,500 by 7,500 blocks and it includes Los Santos itself, as well as the mountainous region of the surrounding Blaine County.

There are also certain underwater parts of the game which have to be replicated as well in order to make this a true one to one recreation.

N11ck regularly updates his channel with progress reports on the project.

Earlier we’ve seen people create games within the game, a working cell phone, a recreation of the lands of Westeros from A Game of Thrones, , the Starship Enterprise, and even Minis Tirith from The Lord of the Rings.