TechLog360
Home Gadgets Android 12 Is Official: A Completely Revised Design In The History... 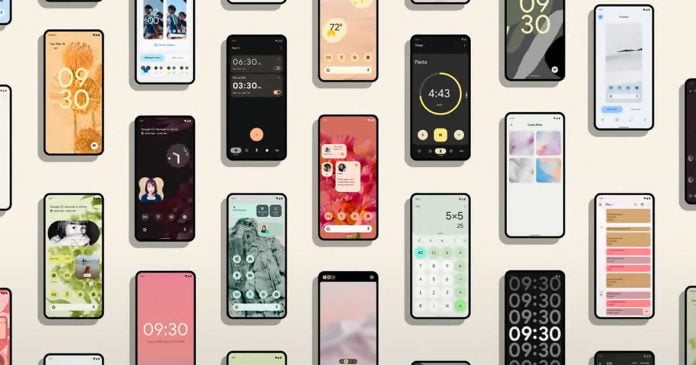 Google presented the first beta of the new Android version 12 at Google I/O 2021.

The first official beta version follows the three developer previews that Google has presented since February 2021. As usual, users of the Pixel smartphones and selected devices can be the first to install the update.

The most striking change is likely to be the design of the user interface. With Android 12, Google is introducing a new design language under the name “Material You,” which is supposed to represent the largest redesign in the history of the operating system.

Colors, shapes, light, and movements should play an important role in Android 12 and Material You contribute to the new possibilities of personalization. Starting with the Pixel devices, users can set the color palette according to their own ideas. It is also possible to have the system select the colors based on the background image.

For users with visual difficulties, not only the contrast but also the strength of the lines can be adjusted. The areas of the notification menu are also easier to distinguish from one another by default.

Overall, the system speed should improve thanks to the interaction of software and hardware — Google speaks of a speed improvement of the core services by 22 percent.

There is a new function for data protection with the Privacy Dashboard. The dashboard shows which apps have requested which information and how often. Users can directly revoke certain permissions from apps. In addition, there is now the option in the quick settings to switch off the microphone and the camera completely.

For sharing the location, there is also an intermediate stage in Android 12 between the complete refusal and the release of the exact location. In Android 12, users with the new permissions can only share the approximate location for apps. For example, a weather app does not need the exact location of the user to provide an accurate forecast of the weather, explains Google.

Google also wants to protect privacy more closely in Android 12 by processing certain functions of the operating system via the new Android Private Compute Core. Above all, Google names AI-supported functions such as Live Caption, Now Playing and Smart Reply, which are now paired with stronger data protection.

The Android Private Compute Core enables Google to introduce new technologies that have been developed in such a way that they pay special attention to privacy. Personal data should be stored securely, privately, and only locally on the smartphone. All audio and speech processing takes place on the device, isolated from the network. In the course of the year, Google plans to move further functions of its own AI-supported services to the specially secured Android Private Compute Core.

Android 12 is now available for download as Beta 1. Google itself supports all smartphones from the current Pixel 5 to the Pixel 3. Registration is possible via the Android 12 beta program page. Beta 1 is not limited to pixel smartphones. However, partners such as Asus, OnePlus, Oppo, Realme, Sharp, TCL, Transsion, Vivo, Xiaomi, and ZTE are also included.