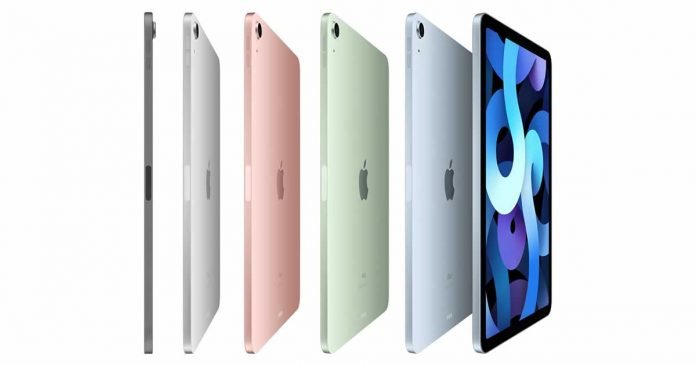 Apple has presented its new iPad Air along with Apple Watch 6 Series and Apple One. The design of the device is based on the iPad Pro models and accordingly has a narrower edge than before.

The new iPad Air comes with a 10.9-inch screen with True Tone technology and 2360 x 1640 pixels and support for the P3 color space.

Nevertheless, the fourth-generation iPad Air is just as big as its predecessor thanks to the massively reduced bezels on all sides. The Touch ID sensor had to give way due to its shape resembling the iPad Pro and was relocated to the power button.

Inside the new iPad Air is Apple’s new SoC A14 Bionic. The chip is the first mobile SoC based on the 5 nm manufacturing process. According to Apple, 40 percent more transistors were installed than in the A13 Bionic. The CPU speed should be 40 percent higher, the graphics unit 30 percent faster.

A single-camera is built into the rear; it is the same model that is used in the iPad Pro. The sensor has 12 megapixels and can record 4K video at up to 60 fps. The front camera has 7 megapixels and should offer improved low-light performance.

In addition, Apple is replacing its Lightning port, as with the iPad Pros, with a USB-C port, which not only can be used to charge the device but can also be connected to external storage devices and external displays. According to Apple, the data transfer speed is higher — 5 Gbit/s.

The iPad Air has stereo speakers and a connector for Apple’s Magic Keyboard. The tablet supports LTE and WLAN according to 802.11ac as well as the second-generation Apple Pencil. The battery should last ten hours.

Apart from iPad Air, Apple also introduced the iPad 8 — the cheapest tablet in the Apple portfolio.

Apple’s inexpensive tablet comes with the A12 Bionic SoC and supports the first-generation Apple Pencil. The display is 10.2 inches. Unlike the iPad Air, it is an LC screen. The camera has 8 megapixels. The new iPad supports the Smart Keyboard again and should have a battery life of 10 hours.

Both new iPad models are shipped with iPad OS 14. The operating system supports, among other things, some new input options with the Apple Pencil. For example, users can write handwritten text in text fields, which are then converted to print. Written dates can be tapped and converted into calendar appointments.

The iPad Air is available in the colors silver, dark gray, rose gold, green, and a bluish tone and costs from $600. The iPad 8 starts at $320. The devices can be ordered immediately and should be available on September 18, 2020.