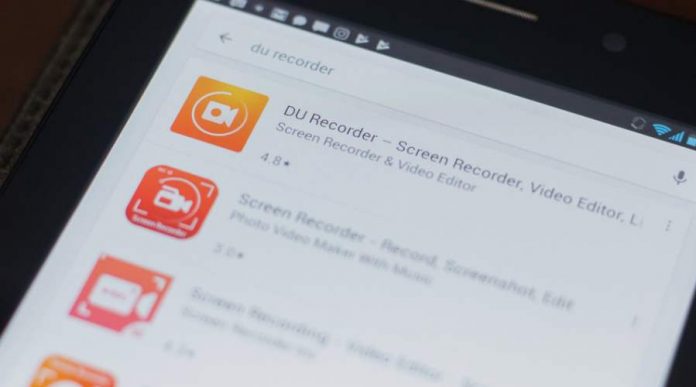 Screen recorder apps for Android is an essential tool for those who like to record their smartphone screen to create an interesting tutorial video or a gameplay for YouTube or other media.

Earlier Android requires root permission to record the phone screen, but after the Lollipop version, we don’t have to root our device and install some root apps for recording screen. Even some Android screen recorder apps are now capable to live streams your screen activity on YouTube and Facebook.

In this article, we are going to list some of the best screen recorder apps for Android, so that you don’t have to check every Android screen recorders on Google Play to find the best one — choose one from this list that best suits your need.

DU Recorder is a feature-rich high-quality screen recorder for Android. Without rooting your Android device you can use DU Recorder as a screen capture, video recorder, and video editor. The app is capable of producing high-quality videos:1080p, 12Mbps, 60FPS, without any time limit and watermark. With in-built video editor, you can trim, merge, add music etc to a video, you can even convert a video to GIF. With DU Recorder you can also live stream your screen to YouTube, Facebook, and Twitch.

AZ Screen Recorder is a no-root screen recorder with no time limit and watermark. This ad-free screen recorder will let you make beautiful screencast videos by providing every feature that you need in a simple and elegant user experience design. You can also record audio from the mic and it is automatically mixed into the screencast videos. The floating window always staying on top will let you snap at the exact moment on any screen. Additionally, there are many other features in this free screen recorder such as setting video resolution, bit-rate, screen orientation, customized timer to stop, saving directory selection, view/share or delete your recorded videos etc. With AZ Screen Recorder, you can record your screen and live stream to different social networks.

Game Screen Recorder is one of the exclusive screen recorder apps for Android to record gameplay. This root free app automatically identifies the game on your phone and records it without any time limit. Game Screen Recorder also offers Prologue Editor, where you can edit the prologue and add it to your video.

Super Screen Recorder is a user-friendly no-root screen recorder app for Android with no time limit and watermark. This app is capable of full HD screen recording and many resolutions, frame rates, and bit rates available. Like DU Recorder, Super Screen Recorder too have an inbuilt video editor to cut, merge and add music to videos and also equipped with a GIF maker.

Screen Recorder With Facecam & Audio, Video Editor is one of the smooth screen recorder apps for Android with built-in photo and video editing tool with no root permission.

So which screen recorder app for Android are you going to install? If you know any other good Android screen recording apps, let us know in comments.