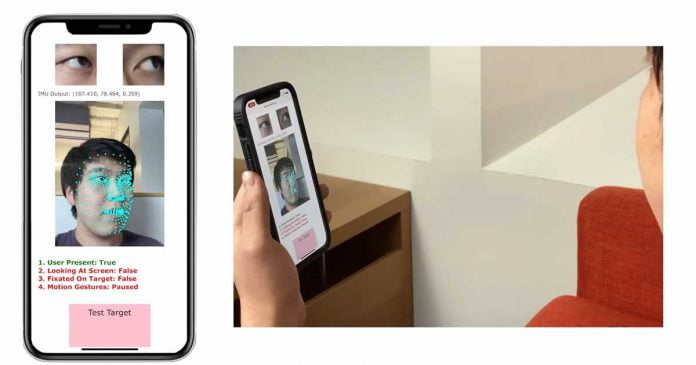 Nowadays, smartphone manufacturers adhere to the “bigger is always better” mentality — with each passing year, smartphones get bigger and bigger. However, this has some drawbacks, one of which is that using a smartphone with only one hand has become a near-impossible task on many occasions.

In contrast to many accessibility projects, this experiment began with the intention of making smartphone control easier for everyone. This is confirmed by the researchers in a press release.

EyeMU is the name given to this new invention. Its goal is also quite simple — they want to improve the comfort of controlling today’s excessively large smartphones. EyeMU works with the device’s front camera, so no additional accessories or external elements are required to use its accessibility technology.

“The big tech companies like Google and Apple have gotten pretty close with gaze prediction, but just staring at something alone doesn’t get you there. The real innovation in this project is the addition of a second modality, such as flicking the phone left or right, combined with gaze prediction. That’s what makes it powerful. It seems so obvious in retrospect, but it’s a clever idea that makes EyeMU much more intuitive.” — aid Chris Harrison, an associate professor in the HCII and director of the Future Interfaces Group.

The team posted a video of it in operation on the Future Interfaces Group’s YouTube channel.

Although the technology heavily relies on sight to control the phone, it will not be the only method. However, we can see in the video uploaded by the researchers that the mobile can be used to a large extent with nothing more than a look, in conjunction with some gestures. In this way, the technology appears to be far more useful than it appears.

Of course, this project is still in its early stages. However, EyeMU promises a bright future for the world of technology, not just for people who require greater accessibility on their mobile devices but for everyone else in the world as well.