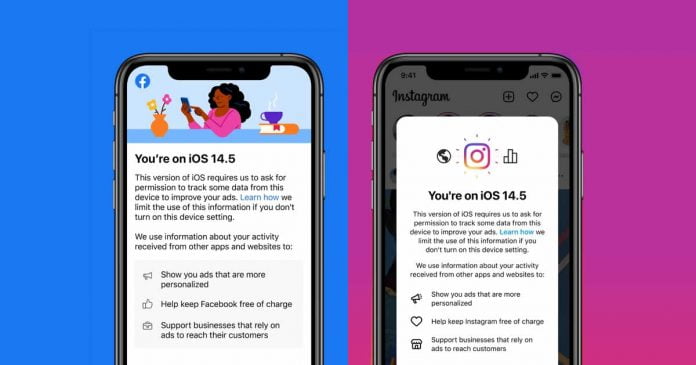 Facebook and its subsidiary Instagram have started to ask their users under iOS 14.5 for permission for cross-app tracking and to respond to a new data protection function from Apple.

To do this, they show a note that should explain the advantages of tracking — as a result; users receive advertising that is better tailored to them, support companies that rely on advertising, and ensure that Facebook and Instagram remain free in the future.

The latter is seen by some users as a threat that in the future, Facebook could ask for money instead of data as payment for its services.

With the notification dialog, Facebook would like to explain the subsequent pop-up window from Apple — There, iOS users can decide whether they want to grant Facebook access to the device-specific advertising ID (IDFA, Identifier for Advertising) under iOS. This is what Apple calls App Tracking Transparency (ATT). This means that every advertising network must obtain permission in every app before it can access the advertising ID.

However, if access to the advertising ID is denied, it does not mean that the app is no longer collecting data. As usual, it can monitor every input, fingertip, and swipe and determine usage habits and times and transmit them to countless advertising networks and tracking services.

Nevertheless, iOS users still have the choice of whether they want to be tracked across apps or not. From a data protection point of view, definitely a gain, but one that can still be improved.