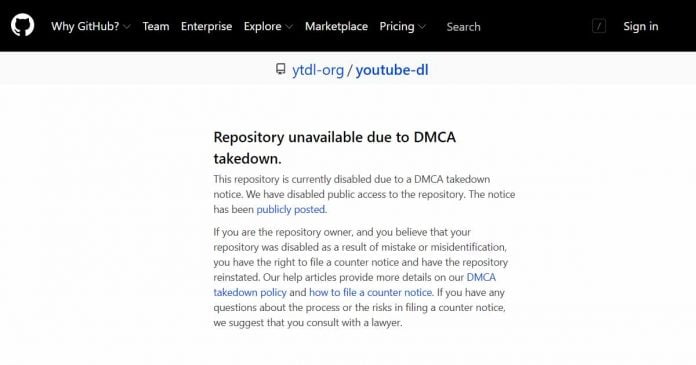 Youtube-dl has returned to its rightful place — to the GitHub repository from where it was removed last month after a legal claim from the Recording Industry Association of America (RIAA).

RIAA achieved the removal of youtube-dl and 17 copies of it last month due to a violation of the DMCA (Digital Millennium Copyright Act). According to the copyright holders, the project could be used to “circumvent the technical protection measures used by authorized streaming services such as YouTube,” allowing users to “play and distribute music videos and sound recordings without the permission of respective copyright holders.”

The incident sparked a flurry of criticism against the RIAA, GitHub and Microsoft, which has owned the service since 2018.

Netizens, other experts, and human rights activists commented that youtube-dl was popular not only among pirates but also it were actively used by internet archivists. The library was often used to download free documentaries, videos in the public domain, etc.

In the end, it turned out that even Nat Friedman, who headed GitHub after acquiring Microsoft in 2018, was also unhappy with the situation.

GitHub representatives now refer to a letter they received recently from the Electronic Frontier Foundation (EFF) lawyers who took over the youtube-dl case. In the letter, the EFF team clarified that Google does not use any technical means to prevent the download of its videos, which should be available for free for all kinds of applications, browsers, smart TVs, and so on. Hence the youtube-dl library cannot be locked under any law as it does not bypass any copyright protection system at all. After all, there is simply no such thing.

Now, GitHub has announced that it has restored the youtube-dl repository after its removal as the company understood the frustrations that had surrounded the case but had acted in compliance with the law. The restitution had occurred after verifying that the tool did not circumvent a technical protection measure.

Most of the youtube-dl forks that were cited in the RIAA’s lawsuit are still inaccessible, but GitHub says it’s going to check each of the projects to see if they bypass a technical protection measure or not.