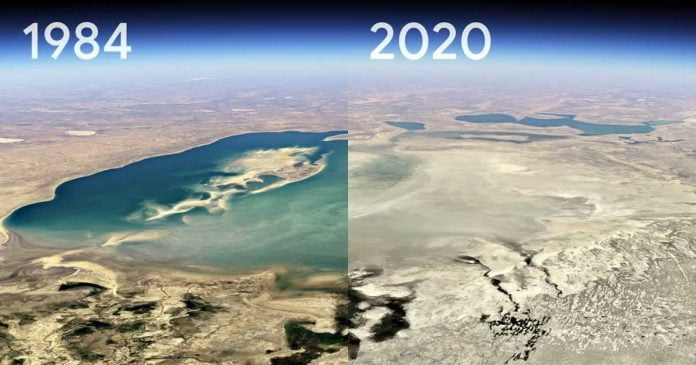 Google Earth receives a major update that integrates the timelapse function, which shows changes in the surface of the earth in timelapse, directly into the three-dimensional view of the globe. Satellite images from the past 37 years were evaluated for this and are available as an interactive “4D experience”.

Introduced in 2013, the timelapse function in Google Earth Engine has been available on the official website and showed the changes in the earth since 1984 in two-dimensional time-lapse.

The Google Earth Engine has received constant updates over the past few years, with support for mobile devices in April 2019. With latest update, Google is integrating the timelapse function directly into Google Earth and making it available in four dimensions via the storytelling platform Voyager.

Google speaks of the most extensive Earth update since 2017 and has compiled 24 million satellite photos from the last 37 years for Timelapse. Once again, the CREATE Lab (Community Robotics, Education and Technology Empowerment Lab) at Carnegie Mellon University was a partner in the implementation. As before, the satellite images come from the Landsat program of NASA and the United States Geological Survey as well as the Copernicus program of the European Union and the European Space Agency (ESA) with their Sentinel satellites.

The pixel crunching of the 24 million satellite images, as Google calls the process, takes place within the Earth Engine on the server farms of the Google Cloud and takes 2 million computing hours on thousands of computers. The data comprises 20 petabytes of images that form a 4.4 terapixel mosaic. The maximum resolution is 30 meters. As the company explains, a normal household PC with only one CPU would take about 228 years to process the data.

Timelapse in Google Earth can be accessed via the storytelling platform Voyager in the left area of ​​the application. Once on the Google Earth website, Voyager can be started using the steering wheel below the search.

Timelapse is then displayed in the right area of ​​the application and allows quick access to initially five areas that are supposed to tell their own stories: change in forests, urban growth, global warming, energy sources and the fragile beauty of our planet. Google Earth offers a guided tour for each of these topics.

In addition, Google offers 800 videos available to the public for download and on YouTube. When downloading, you can choose from high-resolution 4K videos, also in 2D or 3D, as well as variants with or without labels and shorter GIF animations for the 2D versions.

In the future, Google plans to integrate new timelapse images into the platform every year. The plan is to collect the recordings and integrate them with annual updates.