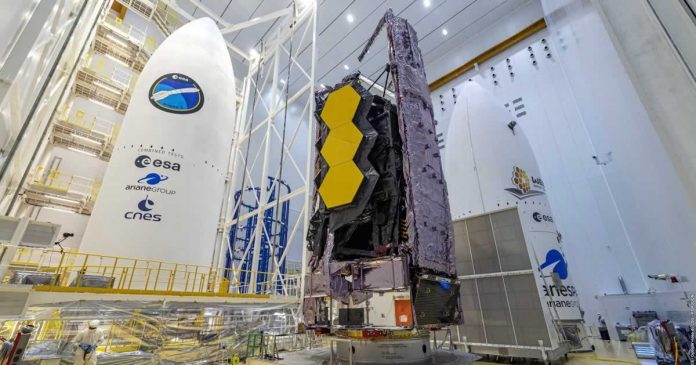 On Christmas Day, December 25, the James Webb Telescope, which began construction 25 years ago, was successfully launched.

At 7:20 am ET (12:20 UTC), the launch vehicle Ariane 5 launched the James Webb Telescope into space from the Arianespace ELA-3 launch complex at the European Cosmodrome located near Kourou, French Guiana.

Now awaits a journey of 1.5 million kilometers in a period of 30 days to the so-called L2 point of space — its goal and unfolds the mirror to scan the universe in the optical and infrared ranges.

The James Webb Telescope operates in the infrared range and will be able to look into the farthest corners of the universe. Scientists do not even know yet what surprises the device will be able to reveal.

During its journey, the telescope will have to deploy solar panels, a sunscreen and a mirror, and James Webb will start operating almost 6 months after its launch. During this time, the device will cool down to operating temperatures, calibrate its mirrors and instruments.

If all goes according to plan, Webb’s instruments will operate at around -225 degrees. And on the hot side of the telescope, where solar panels, a communication antenna and other unscientific equipment are located, it will be about +88 degrees.

The James Webb Telescope costs ten billion dollars, is a joint project of the American, Canadian and European space agencies that was conceived back in the mid-1990s. James Webb is not an improved version of the Hubble, but a completely new class of space telescope, much larger and more complex than its predecessors.