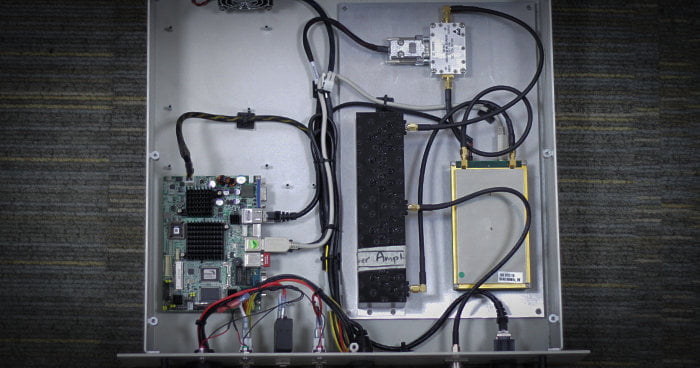 Pakistani researchers have developed a portable, solar-powered mobile phone network for using as a communication medium during  in disasters like floods and earthquakes when regular communications are often disrupted.

The prototype is codenamed as “ Rescue Base Station (RBS) ” and is developed by the joint efforts of researchers at the Information Technology University (ITU) in Lahore and a team from the University of California for Pakistan – the country’s first every emergency telecom system to work on normal mobile phone devices.

“When the RBS is installed in a disaster-struck area, people automatically start receiving its signals on their mobile phones. They can manually choose it and then call, send messages and even browse (internet) data free of charge,” — said Umar Saif, ITU vice chancellor and an adviser to the project.

Also See : [p2p type=”slug” value=”pentagon-to-develop-scorecard-system-to-stay-away-from-hackers” attributes=”target=’_blank'”]Pentagon To Develop A New System Called Scorecard To Stay One-Step Ahead Of The Hackers[/p2p]

The RBS is a lightweight, compact rectangular box fitted with an antenna, a signal amplifier and a battery, which can be carried easily and even dropped by helicopter in hard-to-reach disaster zones. It has a solar panel to charge the battery, to keep it working in places without electric power.The RBS, which operates using open source software, offers all the features provided by regular cellphone companies.And the main features of Rescue Base Stations are:

The RBS has yet to be deployed on the ground, but the ITU expects it to be used in the next six to eight months in partnership with the National Disaster Management Authority and a local telecoms company.

Syed Ibrahim Ghaznavi,Lead Researcher at NEWT, Information Technology Univ. said that it costs around $6,000 to develop an RBS, and the Pakistan prototype has been funded by a Google Faculty Research Award.The RBS team is now working with Endaga, a U.S.-based company that connects rural communities through small-scale independent cellular networks, and a local telecoms firm to commercialise the project, he added.The aim of the collaboration is to help phone companies keep their communications systems functioning in a disaster until their regular networks are restored.

The International Federation of Red Cross and Red Crescent Societies developed a customised communications system called the Trilogy Emergency Response Application (TERA) in Haiti when it was struck by a massive earthquake in 2010.But that system could only send text messages to its subscribers on their mobile phones, unlike the RBS which allows users to call, send texts and even browse the web for free.

Apple and Google are partnering to fight COVID-19 pandemic

Before Their Time: 3 Pieces of Cool Vintage Wearable Technology

Artificial Intelligence: The Next Best Thing in Neuro Sciences

Why You Should Tweak Android Devices?

Sabarinath May 30, 2020 0
Enhancing a beautiful shot or turning a flawed photo into something shareworthy — photo editors for Android is a…

Internet ban? — Chat without internet with these messaging apps for…