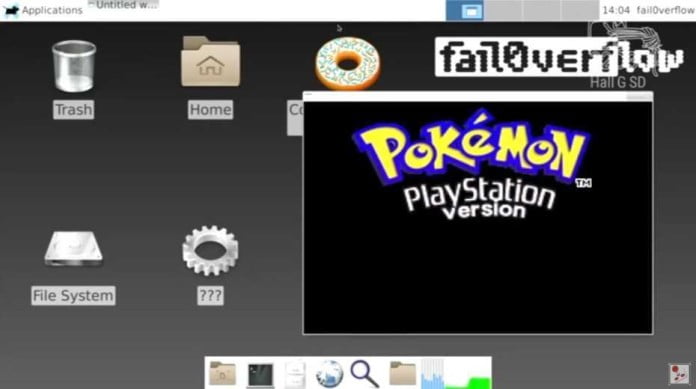 The PlayStation 4 and Xbox One systems are just PCs, and now hardware hackers have started doing some very cool things with at least one of these systems. Console-hacking group Fail0verflow has cracked the PlayStation 4 and loaded it up with a version of Linux.

This is a big step in the process to get homebrew software running on Sony’s popular console. This also turns the PS4 into a real PC. Sony embraced PC-style architecture for the PS4 after experimenting with exotic chips for its last system. And now that has come full circle to the point where the console is running a desktop computer’s operating system.

But it doesn’t stop with Linux. Fail0verflow also booted up a Game Boy Advance emulator and a modded copy of Pokémon that the group calls the “PlayStation Version.”

Check out the full demonstration for yourself in the video below:

The Game Boy emulator is particularly interesting because Fail0verflow actually connected a Game Boy Advance to the PlayStation 4 to serve as the controller. Of course, this is probably not the best way to play your old portable games. But it shows that the hacking group has control of much of the PS4 system.

Getting deep integration with the PS4 means that Fail0verflow has gathered a strong understanding of how the console functions. In the presentation, the group noted that some of the differences between the PS4 and a PC are “crazy” and some are “batshit crazy.” The hackers went on to say that the engineers that work at semiconductor company Marvell Technology Group were “smoking some real good stuff” when they designed the PlayStation 4’s southbridge chip.

Linux on a PlayStation isn’t the craziest thing in the world. Some gamers will remember that the PlayStation 3 launched with a feature called “OtherOS” that enabled anyone to load the system with Linux or other operating systems. Sony eventually removed that, but a community of homebrewers kept it alive on their own. Now, that legacy lives on with the PS4.