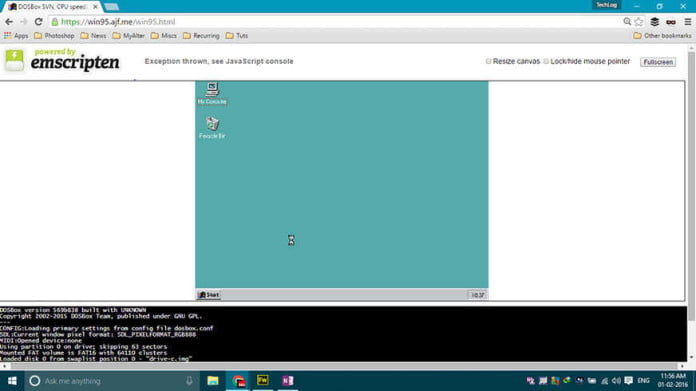 Windows 95 just won’t die. The older it gets, the more versatile it becomes. Last time we heard something strange about Windows 95 was when someone hacked Nintendo 3DS XL to run it. And again now you can run Windows 95 in your browser without using any plugins by following these simple steps.

Also Read : Someone Turn Motorola Lapdock Into A Laptop With Raspberry Pi Zero

LogBook : Run Windows 95 in your Browser

Andrea Faulds, a 19-year-old developer from Scotland, has been able to get run Windows 95 in almost any web browser.

She used used emscripten, an emulator that converts C++ code to JavaScript in real-time. It requires no downloads, plugins, or any special software.

The emulator takes a minute to load up because it have to first download the disk image of 47MB gzipped (131MB uncompressed), so you’ll need to be patient for startup.

To make OS runnning in browser, she installed Windows 95 in DOSBox from a virtualised CD, then packaged up the disk image, along with an AUTOEXEC.BAT file and a custom dosbox.conf using Em-DOSBox.

Also Read : Google Has Rewarded Over $6 Million To Security Researchers Since 2010 For Finding Flaws

The version used Windows 95 OSR2, which had FAT32 and Internet Explorer 3.0.

The emulator isn’t perfect (Internet Explorer crashes inside the emulator, which is to be expected) but it’s an impressive demo, but Fauld’s efforts have to applauded.

Windows 95 was the Microsoft Windows release that introduced such familiar concepts as the Desktop, Start Menu, Taskbar and Notifications Area, which was released in August, 1995.