After many rumours Apple unveiled its newest iPhones at Apple’s special event in San Francisco Wednesday.But the big surprise was, they not only introduced new Iphones but also some other new devices to the world.

Apple CEO Tim Cook has unveiled new iPhones as well as some other surprises.The new generation iPhones, called the iPhone 6S.And with iPhone 6S their is also an iPhone 6S Plus.Apple also brought along the Apple Watch,iPad Pro,ipad Mini 4 and Apple TV

Apple kicked off the event with an update about the Apple Watch. Fashionistas now have more band options. The biggest addition is a wrap-around brown leather Hermés band, which will be available in October. The watch itself now comes in gold and rose gold, and there are new sports band options as well. The smart device was released in April. There are  now more than 10,000 watch apps, including a few new important additions. Facebook Messenger’s app will let you send text, audio and location messages. GoPro’s app acts as a viewfinder for your camera. iTranslate lets you speak a word and get a translation and AirStrip is a tool for medical professionals. It’s also adding transit directions to the included Maps app.

Then next Apple announced the iPad Pro, the 12.9-inch iPad. Apple is touting that they made the width of the iPad Air 2 the same as the height of the iPad Pro. This way you can run your iPar Air 2 apps on the iPad Pro and still have space for another app. Using the new multi-tasking features shown in iOS 9 earlier this year at WWDC. It’s a 4:3 ratio, with a 2732×2048 resolution display. Giving you 5.6 million pixels. That’s more pixels than the 15-inch Retina Macbook Pro. It’s powered by the A9X processor, a third generation of the A9X here. Apple is also touting all day battery life here, around 10 hours. It weighs in at about 1.57 pounds, and is 6.9mm thin. That’s pretty darn thin, but not quite as thin as the iPad Air 2. Apple has also announced the Apple Pencil. Basically a stylus for drawing on the new iPad Pro. The iPad Pro will be available in space gray, gold and silver. It will start at $799. The Apple Pencil will be $99. Available in November.

After iPad Pro,next thing Apple announced was the long-awaited and rumored Apple TV which is powered by Siri.Apple believes that the future of TV is apps, and we’d have to agree actually. Even looking at Android TV, the future is definitely apps. The new Apple TV is still a set-top box, and not built into TV’s like Android TV is. The new remote has a glass touch surface across the top, acting as a sort of touchpad here. You can search for things like “show me movies with Vin Diesel”, and Siri would show you most of the Fast and Furious franchise and a few other movies. Apple is also announcing a new OS called TVOS for the Apple TV. Which gives the new set-top box an app store to find apps to use on your TV at home. The 32GB model will be on sale for $149, with the 64GB coming in at $199.

And finally Apple announced the next generation iPhone today. The iPhone 6S and iPhone 6S Plus.Apple says “we’ve changed everything about these new iPhones”. We’ve heard this before, right? Apple has added a rose gold color. And using a new aluminum frame this year. Probably because of the bending last year. It’ll also be available in silver, space gray and gold. We’re still looking at 4.7-inch and 5.5-inch models. With the new iPhone’s Apple have rebranded Force Touch – which debuted with the Macbook earlier this year – and is now known as “3D Touch”. Basically you apply a little bit of pressure and, for example, in the mail app you can read the message without opening the message in the app. Kinda like the long-press on Android. Not that revolutionary. 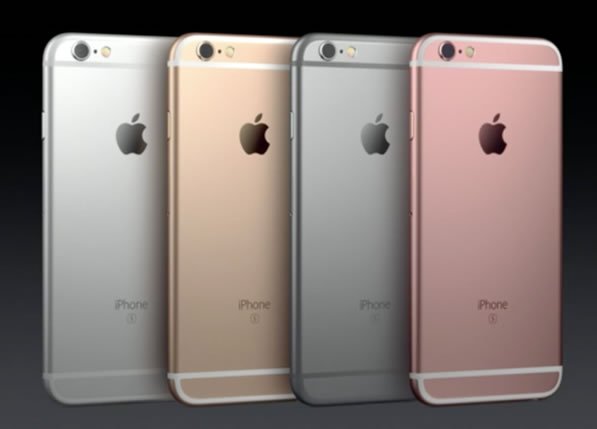 The iPhones are built with the third-generation A9X processor. The same chip as the iPad Pro. Apple has a new Touch ID sensor, the say it’s “lightning fast” this year. The camera has been upgraded to a 12MP camera, from the 8MP camera on previous versions of the iPhone. It also shoots in 4K, for the first time ever. Front-facing camera is now a 5MP sensor. The iPhone 6S will start at $199 with 16GB, 64GB and 128GB models. The iPhone 6S Plus will start at $299 on contract. Again, 16GB, 64GB and 128GB models. Installment plans are $27/month for the iPhone 6S and $31 for the iPhone 6S Plus. Apple is also announcing the iPhone Upgrade Plan which will cost $32/month and you can upgrade each year. That also includes AppleCare. The new iPhones go up for pre-order on September 11th, and available on September 25th.