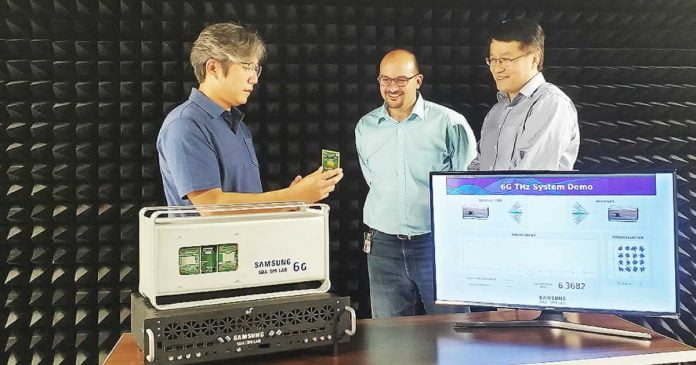 Technology advances at incredible rates. Although we are not in full transition to 5G connectivity, manufacturers are already testing their proposals for the future 6G.

The University of California team of researchers has teamed up with Samsung to complete new tests around a new transmitter and receiver developed by Mark Rodwell, UCSB Professor of Electrical and Computer Engineering, in 2017. These tests have been completed successfully — with this receiver, with a capacity of 140 GHz.

The key to this frequency is that it exceeds 100 GHz, entering the Terahertz (THz) spectrum. An improvement of about 50 times over 5G, which exists in a frequency range of 40 GHz maximum. In addition, this ultra-fast 6G promises to reduce latency in an extreme way — to a tenth of the current 5G.

In addition to the 140 GHz frequency, the transmitter and receiver have a 2 GHz bandwidth. Tests carried out by Samsung allowed data to be transmitted at a speed of 6.2 Gbps at a distance of 15 meters.

But without a doubt, another of the great keys to this 6G connectivity lies in latency. According to Samsung tests, latency over 5G could be reduced to “one-tenth,” making the time lag between sending and receiving information virtually instantaneous.

Thanks to the scope of the terahertz frequencies, Samsung assures that the 6G would allow reaching potential speeds of up to 1 terabyte per second. These speeds could be achieved if these 6G networks operated in the less-used terahertz spectrum, beyond the radio spectrum.

However, we must understand that these tests show the potential of the network and not so much a real scenario that would occur in the consumer market. In fact, it would be difficult for a user to emulate these speeds, especially considering that very few would need to transmit 1 terabyte per second.

5G connectivity has promised speeds in smartphones much higher than what we managed with the current 4G connectivity. Without going any further, the standard has been handling speeds between 10 and 20 times higher than 4G, with peaks of up to 2 Gbps and a latency of between 1 and 2 milliseconds.