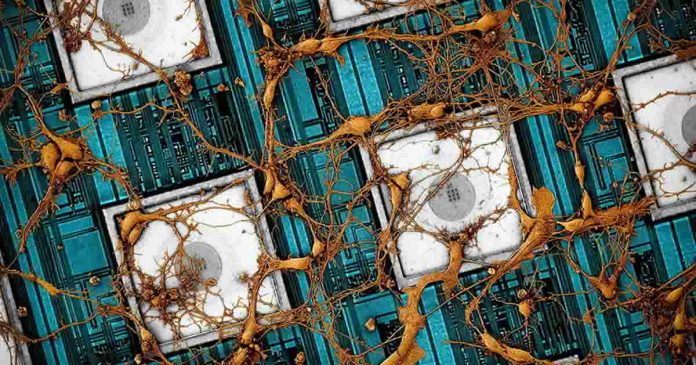 A new Samsung project aims to make the classic ‘copy and paste’ that we would see on a PC but with a human brain to neuromorphic chips.

The South Korean company introduced a new approach to reverse-engineering the brain on a memory chip in a paper co-authored with Harvard University researchers published in the journal Nature Electronics.

The idea, therefore, would be to create a method to ‘copy and paste’ the wiring map of neurons in our brain in 3D neuromorphic chips, based on an array of nanoelectrodes to record large volumes of neurons and thus record their connections and their intensity.

The objective is to copy the map of the neural connections of our brain using this array of nanoelectrodes and copy it into a high-density 3D network of SSD memories.

Since the human brain has approximately 100 billion neurons and a thousand times more synaptic connections, the ultimate neuromorphic chip will require 100 trillion memories. The integration of such a large number of memories on a single chip would be possible thanks to 3D memory integration. Remember that Samsung has played a very important role in the development and distribution of this kind of memory.

If what Samsung wants to achieve, it would be possible to create a memory chip that is close to mimicking the “unique computing features of the brain” that until now have not been able to reach the artificial technology of the human being. This includes, according to Samsung, cognition, adaptation to the environment or easy learning.

Apple Reduced iPhone 13 Production Due To A Shortage Of Chips

20 Best Challenging And Hard Android Games You Should Try In...