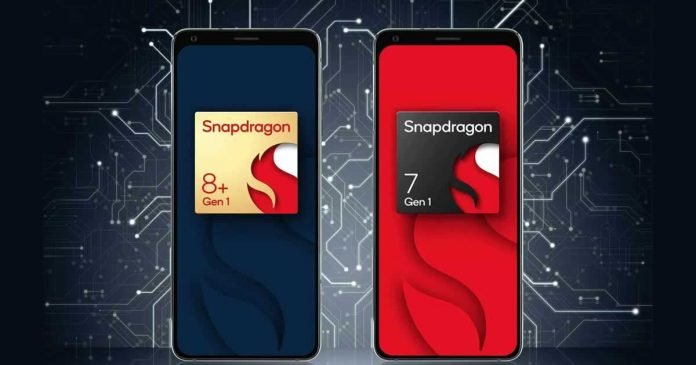 With the Snapdragon 8+ Gen 1, Qualcomm is beefing up the Snapdragon 8 Gen 1 flagship SoC. There are no differences in the range of functions, but the clock rates increase, and consumption decreases. The “4 nm process” remains, but it now comes from TSMC and is no longer from Samsung. 30 percent efficiency has been gained for the GPU and the CPU of this new flagship chip.

Snapdragon 8+ Gen 1 with a 64-bit architecture reaches 3.2 GHz speed. It is accompanied by the Adreno 730 GPU with Vulkan 1.1 support, HDR10 +, HDR10 and Dolby Vision support and an artificial intelligence processor, the Hexagon Processor.

According to Qualcomm, the new SoC achieves the same CPU and GPU performance as its predecessor while consuming 30 percent less power. With the new higher clock rates, the advantage is a bit smaller in absolute terms, but it is still considerable. Overall, Qualcomm speaks of a 15 percent reduction in power consumption of the SoC.

Devices powered by Snapdragon 8+ Gen 1 are expected to be available from Q3 2022 from many manufacturers, including Asus ROG, Xiaomi BlackShark, Honor, iQOO, Lenovo, Motorola, Nubia, OnePlus, Oppo, Realme, RedMagic, Redmi, Xiaomi, Vivo and ZTE, among others.

Snapdragon 7 Gen 1 is the first iteration of the company’s Snapdragon 7-Series focusing on mid-range smartphones. This SoC is also manufactured in 4 nm — but still by Samsung.

Snapdragon 7 Gen 1 is equipped with a Kryo CPU cluster clocked at up to 2.40 GHz and is paired with the Adreno 662 GPU. Qualcomm does not provide details on the speed of this CPU cluster but states that the GPU is 20 percent faster than the block running in the Qualcomm Snapdragon 778G. The chipset manufacturer also claims that the Snapdragon 7 Gen 1 will be up to 30 percent faster in AI-related tasks compared to the predecessor.

The Snapdragon 7 Gen 1 does not have a flagship 5G modem, but the Snapdragon X62 is more than capable because it is capable of a maximum download speed of 4.4 Gbps while supporting a dual 5G standby connection. The new SoC also supports Wi-Fi 6E and Bluetooth 5.3 with support for Snapdragon Sound and aptX, but these will need to be implemented by the phone manufacturer.

Qualcomm has confirmed that the SoC will power smartphones from Oppo, Honor and Xiaomi in the second half of 2022.