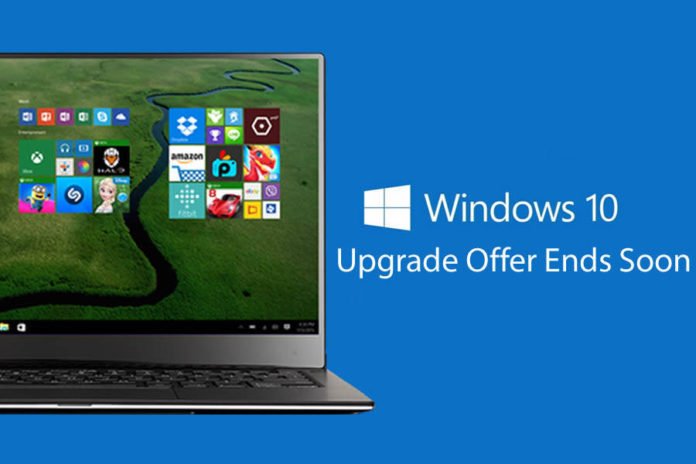 Windows 10 – Microsoft most secure and flexible OS now on 300 million active devices and company announced that they are going to end Windows 10 upgrade offer – upgrading Windows 7 or Windows 8/8.1 to Windows 10 free of cost – on July 29, 2016.

In their official blog post Microsoft confirmed that – “The free Windows 10 upgrade offer was a first for Microsoft, helping people upgrade faster than ever before. And time is running out. The free upgrade offer will end on July 29 and we want to make sure you don’t miss out. After July 29th, you’ll be able to continue to get Windows 10 on a new device, or purchase a full version of Windows 10 Home for $119.”

So after July 29, you’ll either have to purchase a license by paying $119 or buy a new PC with Windows 10 pre-installed. There’s still plenty of time to upgrade at no cost so upgrade to Windows 10 now.

According to Netmarketshare, most popular desktop OS is Windows 7, with nearly 48 percent share and that nearly 10 percent of people still use Windows 8.1. Combined, that means nearly 60 percent of Windows users are eligible for an upgrade that they didn’t used Microsoft free Windows 10 upgrade offer yet.

And the happy news is on the same day, Microsoft will also take down the controversial Get Windows 10 app.

You may know that many new features are coming in the upcoming Windows 10 Anniversary Update this summer, mainly Bash on Window 10. So what are you waiting for upgrade Windows 10 now for free or else you have to pay $119.