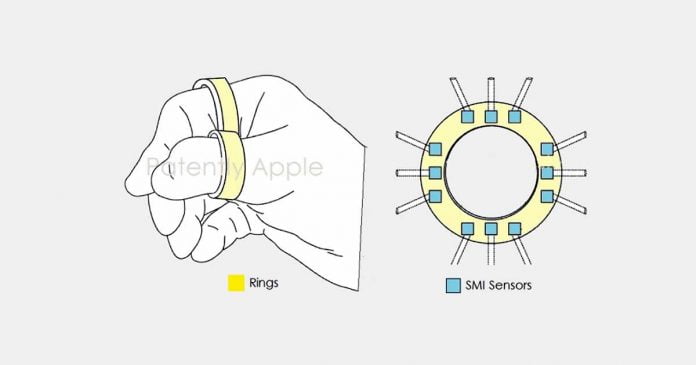 Patently Apple has revealed this Apple project which deals with a gesture-based command entry system, including wearable or hand-controlled devices. In the document, Apple engineers describe a concept based on a variety of devices used by hand, such as a stylus that allows us to write in the air.

Among the examples of the use of this technology is a smart ring, which would have a small processor and sensors capable of recording our movements to translate them into orders for another device.

Earlier we saw researchers developed a ring that generates energy from your body and turns you into a battery, and in this case, Apple bets in this case on the use of laser-based pressure sensors. Instead of detecting the touch directly on the surface of the ring, this system launches laser beams that bounce off the object to be detected and are detected again. It is a concept similar to LiDAR systems such as those of the iPhone 12 Pro, but in this case it would not serve to record our environment but the movements of our hand.

With just two sensors, the ring would be able to record motion in a two-dimensional plane, while with three sensors, it could detect motion in three dimensions. It also contemplates using two rings at the same time to gain more information.

In effect, the ring would be able to record the gestures we make with our fingers and hand, and these would be ‘translated’ to a device such as Apple Glass and to the application that we were using. Also, it could be used in conjunction with an Apple Pencil or similar device, as some images from the patent shows.

Recording the movement of fingers or hands through space would be especially useful for developing applications that allow writing or drawing in the air, for example. We could also control the interface of the Apple Glass using gestures, moving the fingers or the hand in the air to move windows or objects.

In addition, the patent indicates that the ring could have secondary functions, such as vibration, to indicate to the user that it is ‘touching’ elements of the interface and thus facilitate use.