Bluetooth is the ultimate way of data transferring in smartphones and wearables.however,the technology is growing there is always room for improvement.

Recently Researchers at the University of California, San Diego have developed an alternative to Bluetooth that is both faster and more secure.They said this new wireless communication technique will massively outperforms existing wireless tech by using the human body itself to help send data between devices. 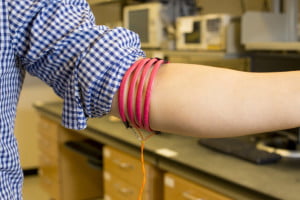 The researchers explained the working principle of this prototype,it sends data signals through the body’s natural magnetic field instead of sending signals over the air. To use the body in data transmission, PVC-wrapped wires go around the user’s limbs, which generate magnetic fields for data to be sent.The wearable device needs to be circular in nature , meaning it trigger a new wave of extremely low-power wearable devices like fitness bands, smart watches, headbands, or belts.

Patrick Mercier, a professor who led the research at UCSD said that:
In the future, people are going to be wearing more electronics, such as smart watches, fitness trackers and health monitors. All of these devices will need to communicate information with each other. Currently, these devices transmit information using Bluetooth radios, which use a lot of power to communicate. We’re trying to find new ways to communicate information around the human body that use much less power,….he also added This technique, to our knowledge, achieves the lowest path losses out of any wireless human body communication system that’s been demonstrated so far.

So what are its benefits over Bluetooth?

The primary benefit is lower power consumption.In Bluetooth devices the datas are trasferred via radio signals,so the electromagnetic radiation that makes up these signals is blocked by something like walls,your body etc.This will create obstructions and resulting in ‘path loss’. So a pretty significant power boost is required to push the signal through something like the human body.

Since with this new technology the human body itself is what transmits the data, eliminating the body as an obstacle.The researchers say path loss using magnetic field human body communication is more than 10 million times lower than that of Bluetooth radios.

Another advantage of the technology could be security. Compared to something like Bluetooth, which transmits data in a wide radius of several metres, magnetic field human body communication prevents any kind of digital eavesdropping, as the signals are largely contained to your body. The researchers say information is neither radiated off your body, nor can it be transmitted from one person to another.

Researchers noted that a limitation of this technique is that magnetic fields require circular geometries in order to propagate through the human body. Devices like smart watches, headbands and belts will all work well using magnetic field human body communication, but not a small patch that is stuck on the chest and used to measure heart rate, for example.

As long as the wearable application can wrap around a part of the body, it should work just fine with this technique, researchers explained.The researchers presented their study at the 37th Annual International Conference of the IEEE Engineering in Medicine and Biology Society in Milan, Italy.