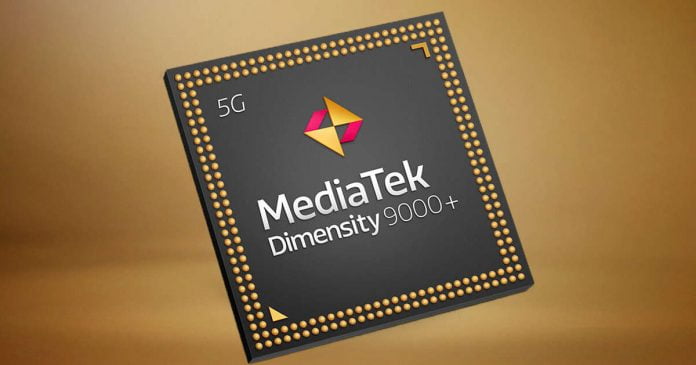 MediaTek announced its first 4nm flagship processor Dimensity 9000 last November. The manufacturer is now introducing the Dimensity 9000+ chipset, which is a minor upgrade over its predecessor and at the same time an answer to the Snapdragon 8+ Gen 1.

Dimensity 9000+ is an interesting improvement over the previous version, clocking in at 3.2 GHz (compared to 3.05 GHz on the non-Plus model). The GPU, a Mali-G710 MC10, has also been upgraded. According to MediaTek, we can expect more than 5% increase in CPU performance and more than 10% improvement in GPU performance.

The Dimensity 9000 Plus is still manufactured by TSMC in 4nm and includes one 3.2GHz Ultra-Cortex-X2 core, three 2.85GHz Super Cortex-A710 cores, and four effective Cortex-A510 cores with a frequency of 1.8 GHz.

The chip comes with an Imagiq 790 ISP image signal processor that supports 18-bit HDR video recording from up to three cameras simultaneously, while a 320-megapixel sensor supports 4K HDR and AI noise reduction. The SoC supports LPDDR5X memory, and is equipped with Bluetooth 5.3 and Wi-Fi 6E adapters, the latest GNSS standard, and also has a 5G modem.

The MediaTek Dimensity 9000+ will be released in the third quarter of this year, but as of now, the company has not revealed which devices will be among the first to feature this new processor.