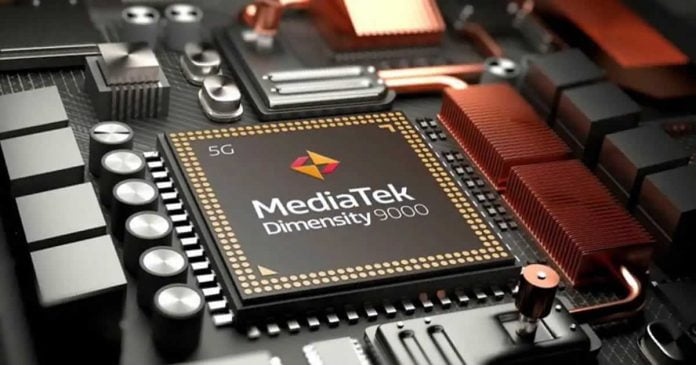 MediaTek has announced its new processor, the MediaTek Dimensity 9000 that rivals directly against Qualcomm’s Snapdragon 888 and Apple’s A15 Bionic.

The new SoC was born with the ambition to go beyond what its predecessors achieved and poses an assault on future high-end smartphones.

The Taiwanese manufacturer MediaTek equips the most smartphones worldwide, with more than 40% market share in the second quarter of 2021.

With Dimensity 9000, Mediatek will be the first to introduce a range of new technologies, including ARMv9 CPU cores, ARM Mali-G710 graphics, support for LPDDR5X memory, and TSCM’s 4-nanometer manufacturing process. As specified by MediaTek itself, this process leads to a 6% reduction in matrix area compared to TSCM’s 5nm manufacturing process, with improved performance and energy efficiency. In fact, ARM itself promised up to 35% increase in CPU performance, with up to 3 times the performance of AI and increased efficiency.

It will have Mali-G710 integrated graphics with 10 cores at 850 MHz and a new MediaTek neural engine fifth-generation that the company claims provides 4X improvements in both performance and efficiency.

In addition, another of the great novelties and virtues of this processor comes with the support of 3200 MHz LPDDR5 and 3750 MHz LPDDR5X memory.

A new triple 18-bit Imagiq790 ISP provides support for a single up to 320MP camera or three 32MP cameras. Video capabilities include support for recording 8K video at 30 frames per second or 4K video at 120 fps , while the chip can decode video at resolutions up to 8K/60fps.

When it comes to wireless connectivity, the Dimensity 9000 already advances the support of 5G NR Sub-6GHz, 4G LTE, WiFi 6E and Bluetooth 5.3 networks.

The first smartphones that will mount the powerful Dimensity 9000 5G chip will arrive towards the end of the first quarter of 2022.