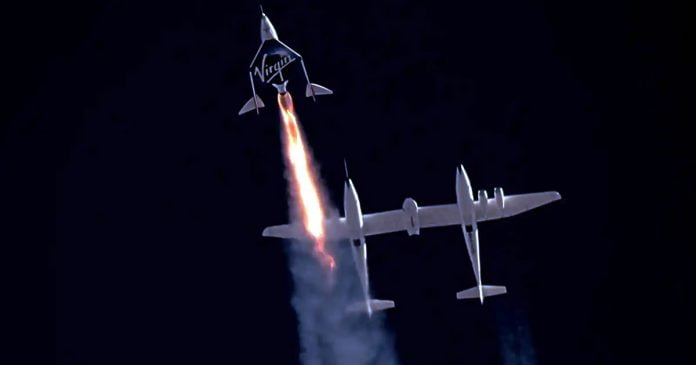 Sir Richard Branson, the founder of the Virgin corporation, flew with Spaceship Two, two pilots and three other passengers to an altitude of 86 kilometers. He has become the first person to go to the edge of space on a ship financed with his own money.

At 9:15 a.m. local time in New Mexico, United States, the SpaceShipTwo undocked from the WhiteKnightTwo at an altitude of about 50,000 feet (15 kilometers), and rose to 282,700 feet (86 kilometers). The mission was baptized as Unity 22 , and the objective is to analyze the commercial viability and comfort of space tourism.

Virgin Galactic launches into space in a different way; instead of taking off from the ground, with one or more rockets, the ship is attached to a large mother plane. After reaching the necessary altitude, it is released and ignites its rocket engine.

Just a few minutes later, having experienced some weightlessness, VSS Unity began the return journey. A steep descent – much more than that of conventional aircraft – and sustained that concluded with the landing at 17:40.

The goal of Richard Branson is to operate five of these ships for private passenger transport service. Virgin Galactic ensures that the goal is for anyone to experience going into space. The flight is priced at about $250,000 and lasts an hour and a half. You will be able to experience several minutes of weightlessness and see the curvature of the Earth.

The first space tourist was the American billionaire Dennis Tito. He paid about $20 million to go to the International Space Station for a few days, aboard a Russian Soyuz spacecraft. Thus he could have the experience of orbiting the Earth at about 400 kilometers high.

That said, one of the seats reserved for Jeff Bezos’s first Blue Origin mission was priced at $28 million, awarded to a stranger through auction. The flight will last a total of 11 minutes. That’s $2.4 million per minute or $42,424 per second. The company will award the entire auction to its Club for the Future foundation.

Richard Branson achieves the milestone of travelling into space in his own company ahead of Jeff Bezos, founder of Amazon, who aims to achieve the same with Blue Origin. Bezos announced in early June that he would go aboard the New Shepard on July 20, which will be the first manned launch in the company’s history. He will join his brother, an unknown millionaire who won the seat auction and the first flight instructor in the history of the United States.

Virgin Galactic expects to complete a batch of test flights over the next few months and begin commercial operations in 2022. According to the latest reported data, around 600 people have bought a ticket to make one of these suborbital flights at a price of $250,000 each. The sale is currently closed and is expected to open in the next few months.