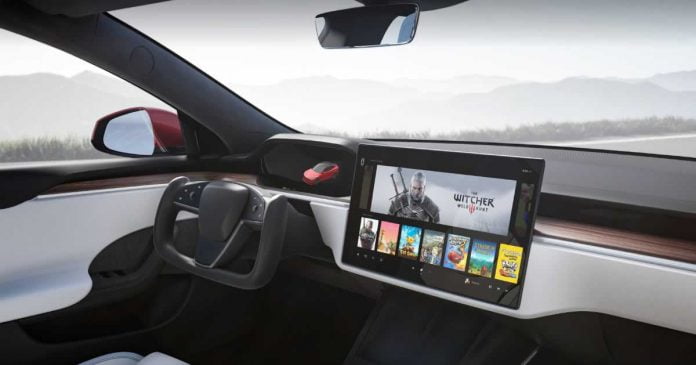 Tesla presented the new Model S and Model X — the e-cars will have a revised exterior that borrows from the Model 3 with black accents and a completely redesigned interior with a 10-TFLOPS infotainment system.

Tesla has also presented the fastest gaming console on wheels. With these models because the electric car not only reaches up to 320 km/h but has also integrated with a gaming console that has a graphics chip with Playstation 5 performance. Tesla advertises the feature with the popular video game, The Witcher 3: Wild Hunt, among others, but according to Elon Musk, the Model S and Model X can also run Cyberpunk 2077.

According to Tesla, e-cars are equipped with a computing power of 10 TFLOPS (Teraflops) — the same level as the latest consoles from Sony and Microsoft. For comparison: the PlayStation 5 has 10.3 TFLOPS, the Xbox Series X 12 TFLOPS.

The game is played either on the 17-inch panel in the center console, which has a resolution of 2,200 x 1,300 pixels or on the display for the back seat. Thanks to the compatibility with wireless controllers, you can play from any seat. A standard 960-watt audio system with 22 loudspeakers and active noise suppression should provide the right background music. Further details are not available.

The games are shown in the advertising material — specifically The Witcher 3: Wild Hunt, The Battle of Polytopia, Cat Quest, Fallout Shelter, Beach Buggy Racing 2, Stardew Valley, Cuphead — are available for different platforms. Except for Polytopia, all are available for Nintendo Switch (Nvidia Tegra X1), but there is an Android implementation. It is, therefore obvious that Tesla will use an ARM-based system again and not x86 technology as in the Playstation 5 or the Xbox Series X/S.

A cooperation with Nintendo is highly unlikely, but with pure Android support, Cuphead and The Witcher 3 would be omitted as there are no corresponding versions.

In view of the 10 TFLOPS, it should be clear that the computing power is provided by an AMD design because neither an ARM Mali nor an Intel Iris or a PowerVR Barrex can do that, and Nvidia has left out anyway.