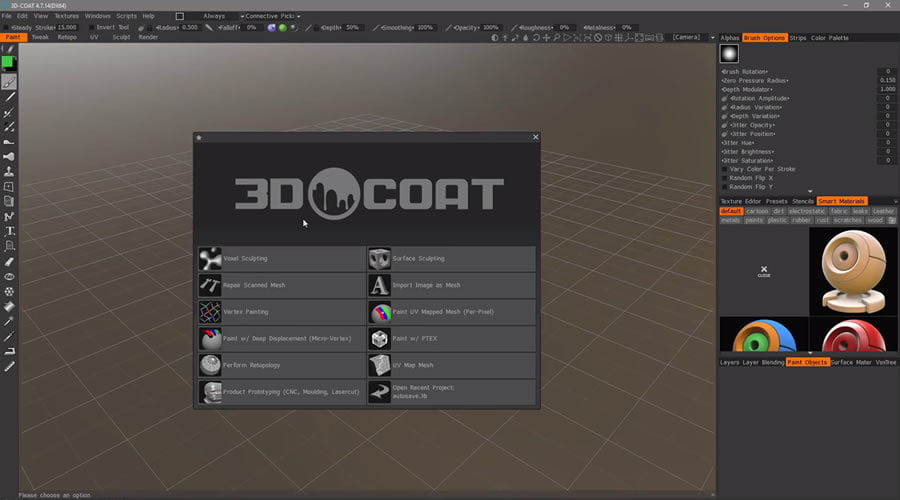 In short, 3DCoat removes the need to purchase (and learn) multiple specialty software titles, which happen to be comparatively expensive, by putting all the production-level tools in a single, affordable application.

Like many 3D applications, 3DCoat separates major tasks and toolsets into their own unique work environment, or Workspaces (often referred to as “Rooms”) with Workspace tabs located above the viewport. The main Rooms are Paint Room for 3D texturing, 3D texture painting and PBR texture painting; Retopo Room for Retopology and Auto-retopology; UV Room for UV mapping, and UV unwrapping; Sculpt Room for 3D sculpting or Digital Sculpting as well as Voxel Sculpting and Render Room for 3D rendering.

The Paint, Sculpt, and Retopo Workspaces have their own native Mesh objects, however, Sculpt (Workspace) objects do share the Paint tools in the Paint Workspace, using a Texturing paradigm known as Vertex Paint. Color, Glossiness, Depth, and Metalness information is stored in each vertex rather than on a UV map. This allows the artist to paint PBR textures now (sculpt phase of a project) or later (after baking to a low-poly, UV mapped Retopo mesh).

PBR Texture Painting: For Texture Artists, 3DCoat has a very familiar UI layout and workflow, as well as many hotkey conventions that are shared with Photoshop. In fact, just 2 hotkey combinations (CTRL + P and CTRL + S) can send and retrieve textures between 3DCoat and Photoshop, so that both applications can seamlessly be utilized in concert with the other. When used across 2 Monitors, 3DCoat and Photoshop can feel like logical extensions of one another ensuring smooth interaction between 3D texture program and a 2D texture program.

3DCoat also has a 2D Texture Editor which can be docked anywhere within the Paint Workspace, allowing the artist to work interactively between a 3D viewport and 2D canvas. What is painted in 2D is updated live in the 3D viewport, while painting in the 3D viewport applies updates to the 2D canvas at the end of each stroke.

“Conditions” Painting is a huge part of 3DCoat’s painting workflow. It allows the user to set conditions where the paint will be applied, such as “More in Convex/Concave” areas, “More in Shadows,” etc. It’s also integrated directly into 3DCoat’s Smart Material Editor. Do you want more wear and/or metalness on the edges or extrusions? Adjust the amount in the editor and see the changes in a preview window prior to applying it to your model.

The UV and Tweak Workspaces work exclusively with Paint Objects (objects that are imported into the Paint Workspace). The Retopo Workspace can import low poly meshes, then a user can send a copy of it to the Sculpt Workspace, as a starting point for sculpting. Large Scale editing (using the Move, Transform or Pose tools) of the Sculpt Mesh can edit the Retopo mesh along with it, using a Toolbar Option to “Conform Retopo Mesh.”

This means the user can work interchangeably between Voxel and Polygon (Surface Mode) sculpting, including usage of LiveClay Dynamic Tessellation, without losing the original low-poly mesh and yet have the low poly original conform to the changes made to the High-Resolution Sculpt object. All these features make 3DCoat one of the best 3D texturing programs on the market.

3D Sculpting: The Sculpt Workspace has a robust set of Primitives and Curves in order to create base objects, with Boolean and FFD (Freeform Deformation) Lattice functionality built-in. It also has Models and Curves pallets that can be used to quickly bring in stored mesh objects (Kitbashing). It also has dedicated tools for 3D Printing such as a 3D Print Supports tool and Splits & Joints tool, for separating 3D printed parts with various options for the creation of joints.

Sculpt Objects also have an extensive PBR Shading library for very accurate look development during the modeling or sculpting phase of a project. PBR Smart Materials or Texture Paint can be applied on top of the PBR Shaders for even greater shading options. For example, a cloth PBR Smart Material can be applied to a character’s clothing, while a PBR Skin Shader (with Subsurface Scattering) can be applied to the skin. An Artist can use painting tools to paint additional freckles or skin spots, dirt or grime, on top of the SSS skin shader, and all of this can be rendered in 3DCoat’s Render room, as a still image (ie., for a Modeling sheet) or Turntable, ready to send to a client or Art Director for approval, before baking things down to a Low Poly Retopo Mesh.

As an example, a character could have considerable sculpting edits applied to the skin, such as wrinkles, pores, etc., and should the artist want to merge an object like a horn or fingernail, onto the skin using the same sculpt layer, all the edits to the skin will remain intact (able to modulate depth at any later point), outside the newly merged object. This remarkable technology is simply unheard of outside of 3DCoat and makes it a cool digital sculpting software.

One of the most noteworthy and distinguishing features of 3DCoat is the ability to both Sculpt and paint PBR textures on a High-Resolution model….Simultaneously, with the same stroke. Everywhere else in the industry, one has to separate these two tasks, and that can be a large time drain. Not in 3DCoat. If an artist has a Smart Material with both Color and Depth (Gloss and Metalness can also be applied at the same time), they can apply both to a High Poly Sculpt or a Low Poly Paint object. It doesn’t matter.

Do you have some rock, cobblestone, ground, brick, or even rusted metal you would like to sculpt and paint at the same time? Sure you do. Then, 3DCoat is the only game in town, if you want to do this with a High poly sculpt.

Retopology: The Retopo Workspace is where an artist can build a lower poly-mesh version on top of a High-Resolution Sculpt Object (Voxel or Surface mode), create and edit UV maps, then bake all the sculpt detail (along with color, gloss, and metalness information) onto it. It also has an extensive set of Polymodeling tools, including Primitives, so the artist has the means to model with Polygons, without having to leave the application, to do so.

3DCoat also includes incredible Auto-Retopology tools, with 2 engines to choose from. The Default or integrated Instant Meshes toolset. There simply isn’t a more comprehensive set of Retopology tools on the market.

Who is 3DCoat designed for?

3DCoat was first is developed in 2007 by Pilgway studio, which is directed by Andrew Shpagin. Andrew specializes in game development and has profound big experience in this area. Thatis fact allowed him to create this unique, simple but yet very powerful software for 3D artists.