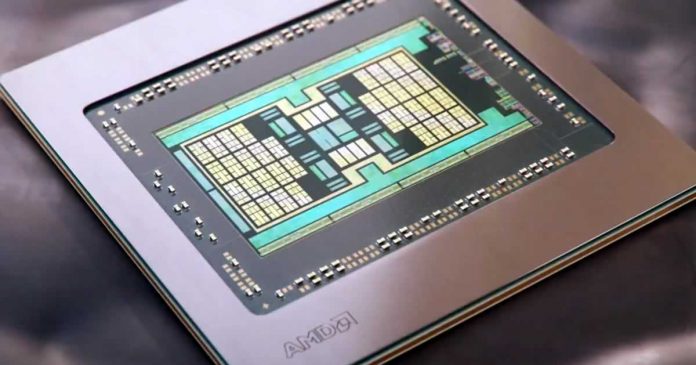 According to a new patent, AMD is potentially planning in the future with graphics chips in the modular chiplet design. However, such a concept applied to GPUs is complex and expensive, according to AMD.

As the website FreePatentsOnline reports, the manufacturer has a US patent with the title “GPU Chiplets using High Bandwidth Crosslink (PDF).”

In the patent, the manufacturer outlines how GPU in chiplet design could look in the future and explains why this approach has not been pursued more intensively so far, and GPUs have been kept in a monolithic state.

According to AMD, the design is very complex and costly and, at least at the moment, still too inefficient, as it is difficult to distribute the parallelism across several chips and to synchronize the memory contents accordingly. Crosslinks with high bandwidth are intended to solve this problem.

According to AMD, a GPU chiplet should communicate directly with the CPU, while the other chiplets communicate with one another via passive crosslinks with high bandwidth and are arranged as a system-on-a-chip (SoC) on a corresponding interposer.

In the past there have been several rumors that RDNA 3 or RDNA 3+ could rely on such a chiplet design, but probably a successor to the professional CDNA solution. Zen 4 and RDNA 3 are still dreams of the future and are expected to appear at the end of 2022.